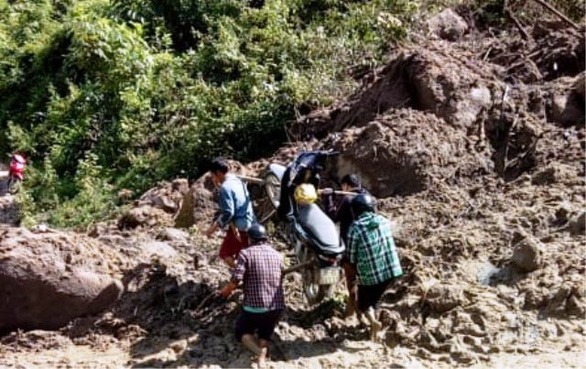 After landslides and mudflows cut off access to a remote mountainous area of north-central Vietnam, local teachers were pictured lifting motorbikes on their shoulders to traverse muddy paths as they made their way to school for clean-up activities before the approaching school year.

Storm Wipha, which hit Vietnam on August 2, has claimed at least nine lives and left 11 others missing in the country's northern and north-central regions.

More than half of the victims are in the north-central province of Thanh Hoa, where the typhoon also damaged hundreds of houses.

Wipha-caused heavy rains led to landslides and mudflows in the province, blocking the only path to one of the locations of the Tay Tien Primary School in Muong Lat District.

On dry days, it already takes teachers an hour to cross the 25-kilometer distance between the center of Muong Lat and the school location by motorbike.

Since Storm Wipha made landfall in the region, knee-deep mud has made riding motorbikes impossible at some sections of the road.

But local teachers have refused to let this setback prevent them from traveling to the school daily to clean up before their students resume class later this month.

Using large tree branches as makeshift carrying poles, four teachers would come together to lift their motorbikes - one by one - across muddy paths.

“Apart from cleaning up our school, we have been going door to door to encourage local Hmong families to send their kids back to school on August 19 as per the province-wide schedule,” said Lang Van Long, a senior teacher.

A total of nine schools in Muong Lat District have been damaged by Storm Wipha, according to the education department of Thanh Hoa.

The mountainous district has requested VND12.9 billion (US$561,000) for damage repair.