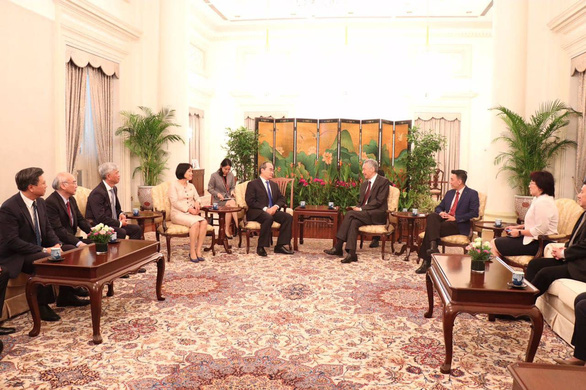 -- Malaysian Prime Minister Mahathir Mohamad arrived in Hanoi on Monday night, commencing his official visit to Vietnam on August 27 and 28 at the invitation of Prime Minister Nguyen Xuan Phuc.

-- A delegation of officials led by Ho Chi Minh City Party Committee Nguyen Thien Nhan had a meeting with Singaporean Prime Minister Lee Hsien Long on Monday, as part of their ongoing business trip to Singapore.

-- A tropical depression has formed in a maritime area east of the Philippines and is expected to strengthen into a storm as it heads toward the East Vietnam Sea within the next three days, according to the National Center for Hydro-meteorological Forecasting.

-- Five high-ranking officials of state-run mobile carrier MobiFone have been probed for their roles in the scandal where MobiFone overpaid for the acquisition of 95 percent of local pay TV provider AVG, a source close to Tuoi Tre (Youth) newspaper confirmed on Monday.

-- An Indian tourist has reported being overcharged by a cab driver who pretended to be an employee of Mai Linh Taxi Line, a popular transport firm in Ho Chi Minh City, after he landed at Tan Son Nhat International Airport on Sunday.

-- The People’s Court in Binh Tan District, Ho Chi Minh City on Monday sentenced Ngo Ngoc An, 63, to two years in prison for molesting a seven-year-old girl in an alley on May 12.

-- Duong Duy, a 40-year-old inmate who was previously sentenced to 14 years in prison for raping his teenage sister-in-law in 2014, has escaped from his jail in the south-central province of Ninh Thuan, officers confirmed on Monday, as they issued a wanted notice for him.

-- The People’s Committee in Ho Chi Minh City is planning on publicizing information of public servants and officials who committed wrongdoings on its news portal, in an effort to deter such violations.

-- Four Vietnamese and foreign companies on Monday signed a deal to invest a total of VND1.7 trillion (US$73 million) into agricultural projects in the southern province of Binh Phuoc.

-- Vietnam beat Russia 2-0 in their opener of the Acecook Cup 2019, an international football tournament for under-15 players in the southern province of Ba Ria-Vung Tau on Monday.