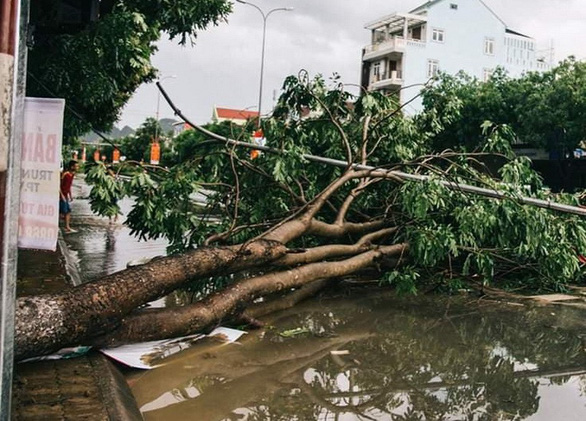 Tropical Storm Podul has weakened into a tropical depression after making landfall in north-central Vietnam on early Friday morning.

Podul, the fourth storm to hit Vietnam this year, reached the coast between the north-central provinces of Ha Tinh and Quang Binh at around 1:00 am, unleashing winds at 60 to 75km per hour and gusts at up to 100k an hour, according to the National Center for Hydro-meteorological Forecasting.

The storm was then downgraded to a tropical depression, with average wind speed reducing to between 40 and 60km per hour.

The tropical depression is forecast to travel westward in the next 12 hours and continue weakening into a low-pressure zone.

Under the influence of the storm's circulation, it is forecast to rain in central provinces on Friday.

Heavy downpours will batter the north-central province of Thanh Hoa from Friday to Monday, with the highest rainfall expected to strike the northern provinces of Hoa Binh, Yen Bai, Son La, and Phu Tho.

In southern Vietnam and the Central Highlands, medium to heavy rain is in the forecast from Friday to Sunday.

Bad weather is expected to affect a three-day holiday from Saturday to celebrate the country’s National Day (September 2) in Vietnam.

Prior to the landfall, rain and strong gusts had wreaked havoc on multiple localities in northern and north-central Vietnam since Thursday afternoon.

In Hanoi, fallen trees killed one person and injured another, while damaging many automobiles.

A total of 78 houses had their roofs blown away and about a dozen utility poles were broken by strong winds in the north-central province of Nghe An.

A fishing boat sank off the central city of Da Nang but all crew members have been brought to safety.