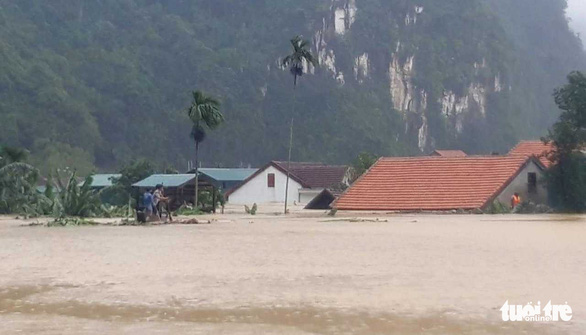 Rain caused by tropical depression submerges over 15,000 houses in Vietnam

More than 15,000 houses throughout north-central Vietnam have been flooded after a tropical depression unleashed heavy downpours in the region earlier this week.

According to a report by the Central Steering Committee for Natural Disaster Prevention, a total of 15,281 houses in Nghe An, Ha Tinh, Thua Thien-Hue, Quang Binh, and Quang Tri Provinces have been affected by severe flooding as of Thursday evening.

Three people have been killed and four other missing as of Thursday, the steering committee added.

Nearly 930 schools in the five provinces were unable to organize school year opening ceremonies on the same day.

Approximately 12,570 hectares of rice paddy has been devastated by the flooding.

Although the tropical depression had already weakened into a low-pressure zone on Wednesday afternoon, downpours were still in the forecast in the localities from Nghe An to Quang Tri Provinces until the end of Thursday.

In Tan Hoa Commune, Minh Hoa District, Quang Binh, inundation was the most serious as floodwaters reached the roofs of many houses.

The locality was completely isolated after all roads leading to it were under water.

Rainwater in Tan Hoa, as well as many other north-central localities, only started receding on Thursday night.