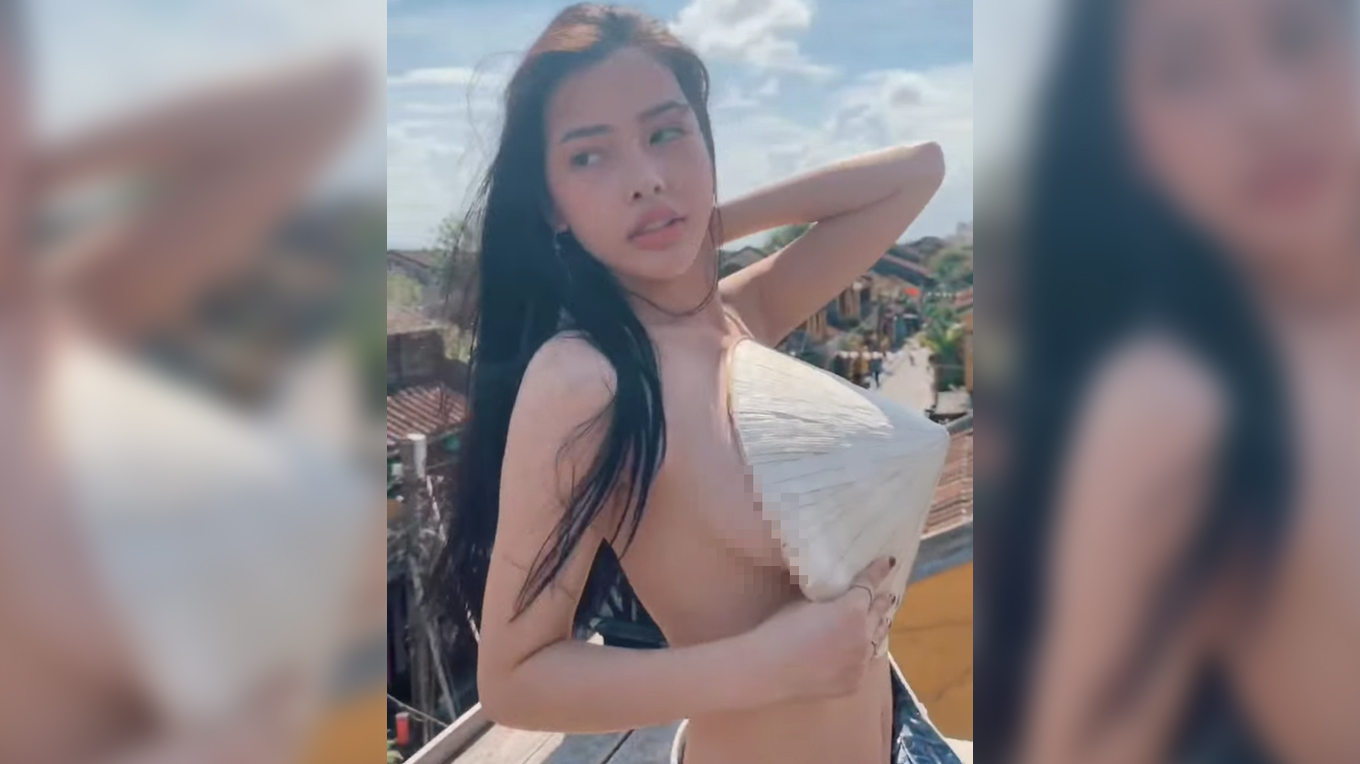 A young Vietnamese woman who appeared in a viral video showing her posing topless in Hoi An Ancient Town, a UNESCO World Heritage Site in central Vietnam, has apologized for her action as she faces fines and criticism on social media.

In a now-deleted video posted to the Facebook account under the name of Tran Mai Huong, a young girl could be seen posing without any top wear and her jeans unbuttoned on top of a building overlooking the ancient town in Quang Nam Province.

As seen in the 24-second footage posted on Wednesday afternoon, she used a conical hat to cover her breasts while doing ‘sexy poses’ before the camera.

In the ‘intro’ section of her Facebook account, Huong claims to be a single mother who works as a model, actress, and event and game show host.

The Facebook account owner with more than 200,000 followers has confirmed it is her who appeared in the clip.

The video came in for a lot of flak in the comment section, with viewers expressing their disapproval of Huong’s “inappropriate” actions at a world-famous site known for its rich cultural and historical heritage.

“Have you got no other place to film this?” J. Tran, a Facebook user, commented under the video.

“You would be more beautiful posing under a bridge or in a cesspool,” Tr. Anh, another user, commented.

“Hoi An is my beautiful hometown, so don’t deface it with your offensive actions,” Anh continued.

Hoi An Ancient Town, located in Hoi An City in Vietnam’s central province of Quang Nam, is an exceptionally well-preserved example of a small-scale trading port active between the 15th and 19th centuries.

The 30-hectare town, with a buffer zone of 280 hectares, was inscribed as a UNESCO World Heritage Site in 1999.

“The town reflects a fusion of indigenous and foreign cultures (principally Chinese and Japanese with later European influences) that combined to produce this unique survival,” UNESCO wrote of Hoi An on its website.

The building where Huong shot her video has been identified as a coffee shop on Tran Phu Street in Hoi An.

The woman and five others went into the shop on Wednesday afternoon fully clothed.

There were no staff members or customers on the top floor of the building so they created the video unbeknownst to others in the shop at the time, a representative of the coffee shop said in a letter sent to the administration of Hoi An City.

“As Hoi An lovers, we are greatly pained by the incident and would like to send our sincere apologies to our customers, netizens, locals and the city administration for failing to monitor photography and filming activities that take place in our shop,” the letter reads.

“We are compiling a report [on the video] to be submitted to the administration of Hoi An City and the provincial Department of Culture, Sports and Tourism of Quang Nam to ask for directions [on how to handle the case], as this is beyond our authority,” Lanh said.

“One is free to expose their body anywhere else but don’t let such bodily images affect the heritage site, [because] Hoi An will not tolerate such behaviors and there are written regulations to enforce our view,” the official added.

Those behind the video can be fined by Vietnamese laws regardless of whether they filmed it for personal use or as part of a business project, according to Ton That Huong, head of Cultural Management under the Quang Nam Department of Culture, Sports and Tourism.

If the purpose is personal, they can be fined under a regulation on using social media platforms to spread “offensive” content that goes against “fine customs and good traditions."

If it is part of a business project and the woman is a contracted model, they can be fined under regulations that monitor the entertainment industry, the official added.

As of Thursday evening, the video had been removed from the Facebook account as Huong also posted an apology for the gaffe.

“I would like to apologize to all citizens of Hoi An as well as netizens,” she wrote in the post published around 7:00 pm on Thursday.

“After I filmed the video in the heart of Hoi An, I just wanted to share it on my personal account because I thought it was beautiful,” she said.

“I didn’t think it would negatively affect the fine customs and good traditions of Hoi An Ancient Town,” she continued.

Huong said she “sincerely apologizes” for her actions and hopes for forgiveness from critics for her “foolishness and narrow-mindedness."