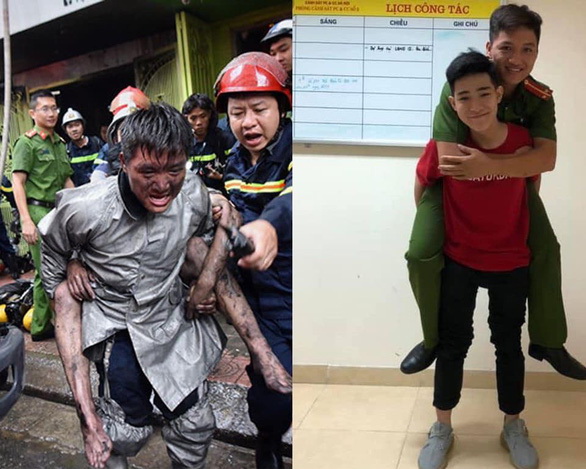 A teenage boy who was carried to safety by a firefighter from a house fire in Hanoi last month has recreated a photo of his rescue with the hero who saved his life.

Nguyen Hoang Giang, 18, was trapped in a fire at a clothing store on Nui Truc Street in Hanoi’s Ba Dinh District on September 10.

Hoang, an officer from the department of firefighting police in Dong Da District who was dispatched to the site, found Giang unconsious on the building's burning fourth floor and carried the boy on his back all the way to the ground.

The heroic action saved the boy's life. Giang has made a speedy recovery and is now well on his feet one month after the fire.

On Friday afternoon, the boy and his father paid a visit to the Dong Da firefighting police department to personally say their thanks to Hoang and his colleagues.

“Thank you for carrying me on your back out of the fire,” said an emotional Giang as he gave flowers to his hero.

"It's no big deal," the humble fireman replied simply, adding that it was his sworn duty to save lives.

Nguyen Viet Thanh, Giang’s father, told Tuoi Tre (Youth) newspaper that his son has been talking about an opportunity to meet his savior since he regained consciousness after the incident.

As a parent who almost lost his son to the fire, Thanh said he still gets emotional whenever he recounts the moment the brave firefighter brought Giang out of the burning building.

“For the rest of my life, I will never forget that Hoang risked his life to save my son’s,” Thanh said.

“Without them [the firefighters of Dong Da District], I don’t know how my life would have turned out.”

At Friday’s meeting, Giang and his father also took some photos with Hoang and other firefighting officers.

The 18-year-old jokingly gave Hoang a piggyback ride when they posed for one of the photos, recreating a similar photo of the fireman bringing Giang out of harm's way during last month’s rescue.

“I felt great being able to carry brother Hoang,” Giang said of the fireman, who is nine years his senior.

The adorable "piggyback" photo has received loads of compliments after it was shared on Facebook on Friday.