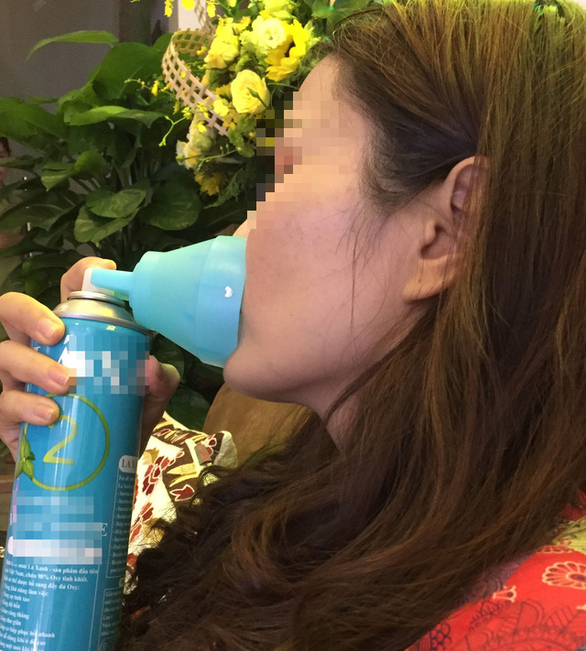 As Vietnam’s big cities have been engulfed in toxic air for months, some Vietnamese people have turned to a novel solution – buying hits of purified oxygen to escape the pollution.

To make it worse, air quality in the two Vietnamese cities has been on a serious decline since September.

Residents concerned about the air quality have tried to guard themselves against the pollution with such measures as wearing facemasks, sealing windows in their home, or refraining from outdoor activities altogether.

Recently, the options have been expanded to include portable oxygen bars and canisters.

These oxygen devices include a cylinder with a funnel and a hand pump.

Customers strap the funnel to their nose and press the pump to inhale what is advertised as purified oxygen.

These portable oxygen products are sold widely in Vietnam and come in various sizes, advertised to contain enough oxygen to last two to three hours of use per canister on average.

N.T.H.T., a 36-year-old woman residing in Ho Chi Minh’s Binh Thanh District, told Tuoi Tre (Youth) newspaper that she and her friends have bought mini oxygen canisters after reading advertisements claiming they can improve one’s energy levels by supplying the body with “the purest air."

Information on the canisters shows pure oxygen helps replenish energy after physical exercise and is intended for tired, stressed, and old people as it is “the cleanest source of air.”

Likewise, some spas in Ho Chi Minh City are offering pure oxygen treatments to its customers, claiming that the inhalation of this oxygen can help customers “dissolve” any fine dust they had inhaled.

However, the liberal use of oxygen therapy can lead to acute consequences, according to Le Thi Tuyet Lan, vice-chairwoman of the Vietnam Respiratory Society (VNRS) - a voluntary, non-profit social organization.

Lan told Tuoi Tre that oxygen therapy is not prescribed for normal, healthy individuals, but only for people who cannot get enough oxygen on their own as medical conditions prevent their lungs from absorbing oxygen.

To determine whether a person will benefit from oxygen therapy, doctors must test the amount of oxygen in their arterial blood, Lan said.

According to Lan, normal levels of arterial blood oxygen are between 75 and 100 mmHg (millimeters of mercury) and a person’s blood oxygen level should not rise above 110 mmHg.

When oxygen in the bloodstream exceeds this baseline, it may cause respiratory failure, oxygen toxicity, or damage to lung cells.

She advised that people should not take oxygen therapy as a treatment for air pollution-related sicknesses as there is already enough oxygen for a normal person in the air despite the pollution.

Moreover, oxygen tanks pose a fire hazard and should be handled with caution near open flames and heaters, the VNRS vice-chairwoman warned.