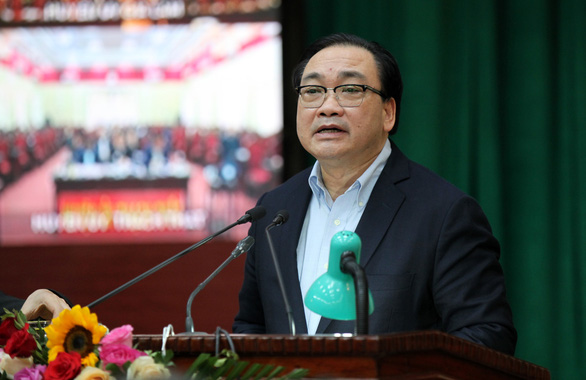 Vietnam’s all-powerful Politburo on Friday issued a disciplinary warning against Hoang Trung Hai, a Party member and former deputy prime minister, for his violations in overseeing a production expansion project of a state-owned iron and steel company while in office.

Hai is a Politburo member and the current Party chief of Hanoi. He served as deputy prime minister between 2007 and 2016.

The decision for Hai was made during a Politburo meeting chaired by Party General Secretary and State President Nguyen Phu Trong in Hanoi on Friday.

As deputy prime minister, he had serious violations and shortcomings in giving directions on the implementation of the second phase of a project to expand production at state-run Thai Nguyen Iron and Steel Joint Stock Corporation, which specializes in making cast iron and steel, known as the TISCO II project, the Politburo concluded after considering a proposal by the Party's Central Inspection Committee.

Specifically, Hai showed a lack of responsibility and failed to thoroughly consider opinions of ministries and agencies on the project’s engineering, procurement, construction (EPC) contract No.01, against the Government’s working regulations and the State regulations on investment and export credit.

Hai also failed to inspect and direct the inspection provided for by the Government’s working regulations, according to the Politburo’s conclusion.

The top decision-making body of the country said that Hai’s violations and shortcomings were serious, causing public concern, badly affecting the Party’s and his own prestige.

Given the nature, level, consequences, and causes of his violations, as well as his working process and contributions to the Party and State, the Politburo decided to give a warning against him as a disciplinary measure.

The TISCO II project was approved in 2005 with a total capital of over VND3.8 trillion (US$242 million).

It had two main packages, one of which is an EPC package regarding the development of a metallurgy processing line.

The EPC package was auctioned to the China Metallurgical Group Corporation (MCC) for over $160 million.

However, the Government Inspectorate discovered in February 2019 that the project’s total capital had been illegally altered by TISCO, from over VND3.8 trillion to VND8.1 trillion ($350.4 million).

Furthermore, at the time of discovery, TISCO had already paid MCC over 92 percent of the total value of the project, while the project was nowhere near completion as the EPC contractor MCC and other contractors had stopped all construction activity as of 2013.

Since then, some project equipment has been damaged, further impacting the project’s progress and quality, causing investment capital losses, inspectors said.