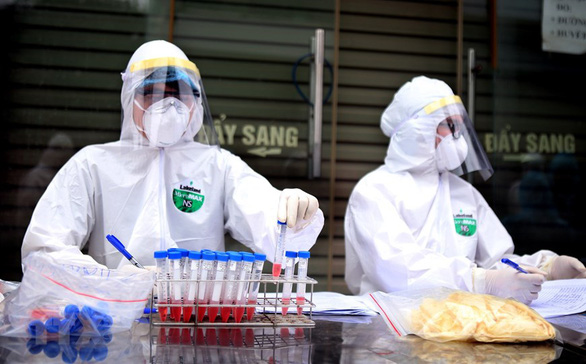 Vietnam’s Ministry of Health confirmed two new cases catching novel coronavirus disease (COVID-19) on Monday morning, both linked to a village cluster in Hanoi and one of them working for a Samsung subsidiary.

The two patients include a 26-year-old man and a 60-year-old woman. Both reside in Ha Loi Village, Me Linh District, Hanoi.

The man came into close contact with a relative, who had been infected with the novel coronavirus, on March 27.

He had a fever and dry cough on March 31.

A sample was taken from him on Saturday and his test returned positive for COVID-19 on Sunday.

He is being treated at the second branch of the National Hospital for Tropical Diseases in Dong Anh District, Hanoi.

The patient works in quality control for Samsung Display Vietnam in Bac Ninh Province, located in northern Vietnam, according to local media.

The woman had her sample taken on Saturday and her test came back positive for the virus on Sunday.

She is under treatment at the same hospital as the man.

Ha Loi Village has been locked down since April 7, as at least ten cases have been traced back to this place to date.

Vietnam has confirmed 262 infections as of Monday morning, 144 of them having recovered, the national committee on COVID-19 prevention said in its latest report.

The active cases are treated at 14 hospitals across the country.

Twenty-two have tested negative for the virus once while 16 have had their tests return negative twice. They are still under treatment, pending further notice from the health ministry.