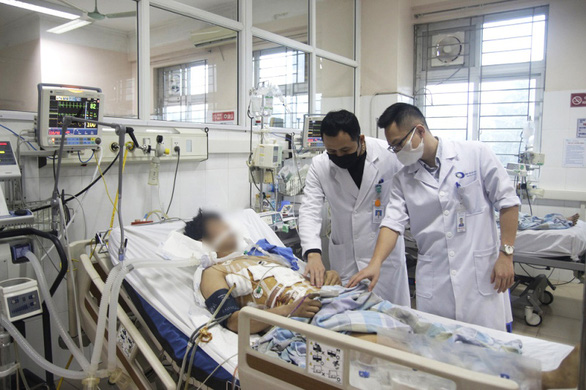 A construction worker miraculously survived a long metal rod piercing through his body after he fell off a high scaffolding platform while working at a site in the northern Vietnamese province of Quang Ninh.

Bai Chay Hospital in Quang Ninh on Monday said its doctors had successfully saved N.N.M., 34, of Hoai Duc District in Hanoi, from a severe injury owing to the accident.

M. was admitted to the hospital suffering from multi-trauma shock, excessive bleeding, pain, shortness of breath, and pale skin on Sunday after he had fallen off a 15-meter-tall scaffolding structure while working on a construction site in Quang Ninh.

An iron rod about two meters long which had pierced through his abdomen during the fall remained attached to his body at the time of hospitalization.

The worker was immediately rushed to an operation room as doctors said the rod had caused multiple internal trauma and damaged the right lower lobe of his lungs, resulting in blood and air accumulation in the cavity between the lungs and the chest wall and about two liters of blood in the abdomen.

A team of surgeons rushed to perform a grueling surgery to remove the rod.

After four hours of surgery, the rod was safely removed with hardly any acute bleeding or damage to other organs in the surrounding area.

The patient regained consciousness six hours after the surgery, according to Nguyen Thai Binh, deputy head of the surgery department at Bai Chay Hospital.

He is in recovery and now able to make eye contact with, listen, and talk to doctors.

Dr. Binh commented that such an injury as M.’s is a rare and extremely dangerous workplace accident, in which the patient often dies quickly from multiple trauma and shock from blood loss.