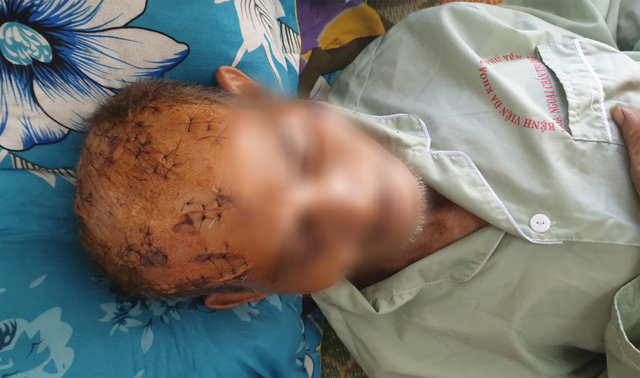 A 74-year-old man in the south-central Vietnamese province of Phu Yen has been brutally assaulted by his own son and grandchild over a dispute arising from the selling of land to pay for his cancer treatment.

Phu Yen Police said on Friday that they are working on the case in An My Ward, Tuy An District and seeking to charge the assailants for "murder".

The victim, 74-year-old Doan Tam, was repeatedly battered in the head and face by his firstborn son D.C.T. and grandchild D.C.M. to the point where he had to be hospitalized with 17 facial lacerations.

Tam, who is now treated at Phu Yen General Hospital, told Tuoi Tre (Youth) newspaper he has been receiving treatment for a malignant neck tumor for four years and counting at a hospital in Ho Chi Minh City.

As money for his treatment dries out, Tam intended to give each of his five children a part of the land he owns and sell off the rest to pay hospital fees.

The plan faced harsh objection from T., who argued that his share of the land — already the biggest among his siblings — was not enough considering his status as the eldest son and heir to the family name.

“As I disagreed, he tried to prevent me from selling [the land], even harassing potential buyers and hurling rebukes at me,” Tam recalled.

The situation escalated at around 3:00 pm on Monday, when Tam visited T. to address the issue.

Tam said T. and M., one of his grandchildren, tied him up and brutally battered him in the head and face with kitchen knives until he passed out.

While fending off the perpetrators to rescue his dad, Tam’s youngest child Doan Huynh Tuong was also maimed on the head.

Phu Yen General Hospital said a total of 17 wounds on Tam’s head and one on his arm were counted, the largest of which measured eight centimeters long.

Tuong also received treatment for a large laceration on his head.

Police of Tuy An District have handed case files to Phu Yen Police to investigate the alleged "murder" attempt.