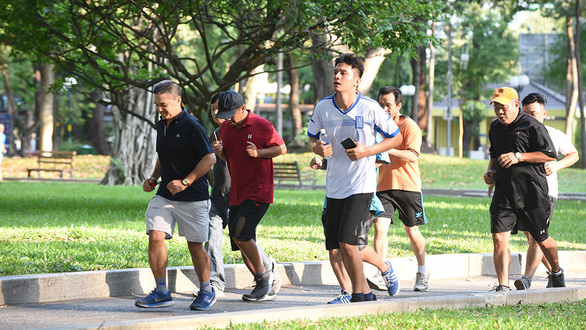 Statistics from the municipal Department of Construction showed that the southern metropolis currently offers only 0.55 square meters of public park per citizen.

The figure pales in comparison to Singapore’s 30.3 sqm per person, Washington’s 40 sqm per resident, and Seoul’s 41 sqm per capita.

Against that backdrop, Ho Chi Minh City’s urban planning authorities have set a target to raise public parks' total area to 11,400 hectares, or seven sqm per resident, in the future.

The city is on its way to realize this target, although at a snail’s pace of 1.54 hectares of park added a year.

Recently, parts of the city’s public parks, which had been occupied for commercial purposes other than serving as green spaces, have been reclaimed and returned to their original function.

For instance, 1,476 sqm of Gia Dinh Park, which borders the three districts of Phu Nhuan, Go Vap, and Tan Binh, that had been converted into a bus parking lot at the end of 2017 is now a green space again after the parking lot was cleared at the beginning of this year.

Likewise, commercial sites at downtown 23/9 Park have been dismantled since June 2019.

The Sen Hong concert stage, a 6,000 sqm performance area inside the park, was already removed, while the existing bus terminal there will also be relocated so that the park can be transformed into a true public space and one of the most modern constructions in the city.

The reclamation process, however, is sluggish.

Once the reclamation is completed, lighting systems and plants will be added to the space to create an esthetic common area for residents' use, according to the city’s construction department.

No added facilities or new construction will be built in the park.

A green space will be required for each new or incomplete housing project.

On the other hand, the city’s authorities will create favorable policies to draw private investment into construction of new public parks larger than ten hectares each.

These new parks may include pay-to-enter playgrounds, exhibition areas, and indoor or outdoor fitness areas.

Urban open spaces larger than 100 hectares each can be considered for building entertainment complexes that include public parks.

The Department of Construction said that it will mobilize domestic experts, as well as cooperate with experienced foreign architects, such as those from the National Parks Board in Singapore, to build a roadmap for the development of modern parks in the city.