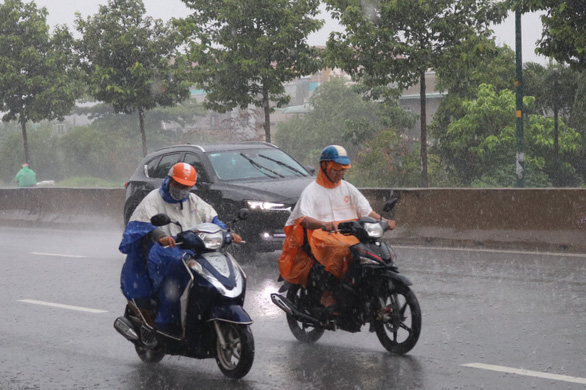 Storm Nuri, the first tropical storm to affect Vietnam in 2020, has become stronger, causing torrential rain in Ho Chi Minh City and other southern localities on Saturday, according to the National Center for Hydro-meteorological Forecasting.

As of 1:00 pm on Saturday, the eye of the storm, which had developed from a tropical depression off central Vietnam after entering the East Vietnam Sea on Friday, was located 450 kilometers northeast of the Hoang Sa (Paracel) archipelago.

The highest wind speed reached 60 to 75 kilometers per hour.

In the next 12 hours, Storm Nuri is forecast to move northwest at 20 to 25 kilometers per hour and may pick up more strength.

The storm’s center is forecast to be 120 kilometers southeast of China’s Guangdong Province by 1:00 am on Sunday, packing winds of 60 to 90 kilometers per hour.

It is predicted to make landfall in Guangdong around 1:00 pm on the same day, with winds around the center reaching speeds of 60 to 75 kilometers per hour.

The storm will cause heavy rain, strong winds, and rough sea, with high waves of three to 5.5 meters in the northern area of the East Vietnam Sea, including Hoang Sa.

In the next 24 to 48 hours, Storm Nuri will move northwest further into mainland China before weakening into a tropical depression and a low-pressure area.

All boats and ships operating in the northern area of the East Vietnam Sea, including Hoang Sa, are at a high risk.

From Saturday afternoon, there is a high possibility of thunderstorms, whirlwinds and gusts in northern and north-central Vietnam.

From Saturday night until Monday next week, moderate to heavy rain is forecast to dampen northern Vietnam.

According to the southern hydro-meteorological station, the storm will strengthen southwest winds, bringing heavy rain to Ho Chi Minh City and neighboring localities.

The station also warned people about inundation in low areas.

According to the observation of Tuoi Tre (Youth) newspaper’s reporters, dark clouds began to form over the southern metropolis from around 2:00 pm on Saturday.

It then rained in several areas in the city. The rain lingered on well into the evening and had not stopped as of 7:30 pm.