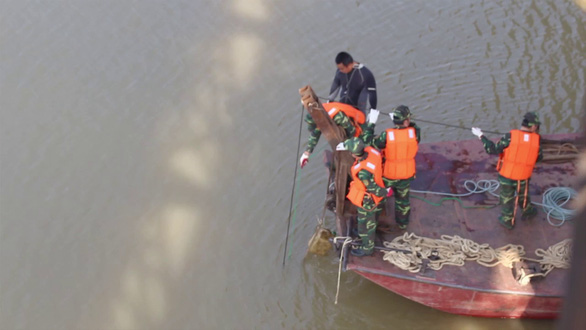 Authorities in Hanoi have banned ships from traveling on the Hong (Red) River section near the historical Long Bien Bridge since Wednesday after an unexploded wartime bomb was found there.

Local fishermen reported to the city’s waterway management board about their finding of an object resembling a bomb the size of an oxygen tank in the Red River, about 800 meters away from Long Bien Bridge in the namesake district.

The Vietnam Inland Waterway Administration North Branch confirmed the object is an unexploded wartime bomb, measuring 1.6 meters in length and about 35 centimeters in diameter.

The agency sent a task force to inspect the scene and notified the military command of Long Bien District under the Capital High Command of the issue.

It has also prohibited ships from traveling on the river section where the bomb is located from Wednesday as a precaution and to clear space for upcoming work to salvage the ordnance.

Forces from the military command of Long Bien District are currently guarding the site.

The salvage is scheduled to take place after Vietnam’s lawmaking National Assembly concludes its ninth session on Friday, according to a source.

In November 2017, the military also moved and neutralized another unexploded wartime bomb more than two meters long, lying about five meters away from a pier of the Long Bien Bridge.

Inaugurated in 1902, the bridge was used to transport weapons and goods from the north to the center of Vietnam during the country’s war against French invaders.

It was a target of heavy bombings by U.S. forces between 1967 and 1972 during the American war in Vietnam, according to the Vietnam News Agency.