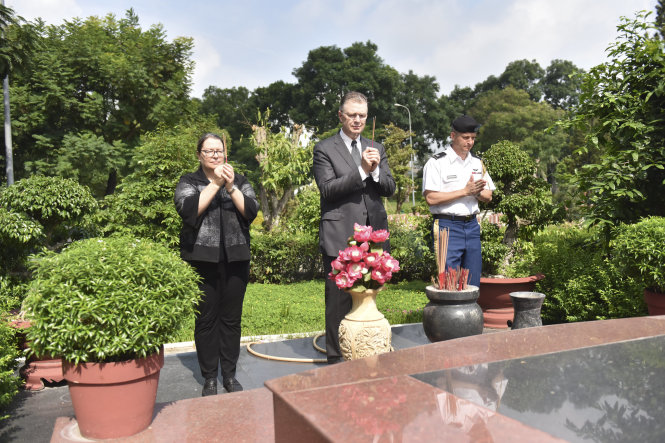 Vietnam well-positioned to benefit from shift in global supply chains: US ambassador

Vietnam is well-situated to benefit from the ongoing shift in supply chains that will likely be accelerated by the global novel coronavirus disease (COVID-19) crisis, U.S. Ambassador to Vietnam Daniel Kritenbrink told Tuoi Tre News on Monday.

The ambassador met with the media in Ho Chi Minh City on Monday, where he remarked on the state of the Vietnam-U.S. relationship ahead of the 25th anniversary of bilateral diplomatic relations in July and shared his vision for where the countries are going forward.

“Some friends in Hanoi had told me that they anticipated that some of the shifts in supply chains that were underway prior to the COVID-19 [pandemic] would presumably be accelerated following the crisis. And I think Vietnam is well-situated to benefit from the shift in some of those supply chains,” Ambassador Kritenbrink said.

It will be incumbent on Vietnam to think about its value added and advantages in new areas and do what it takes to develop its own capabilities there, he underscored.

“Vietnam has done a tremendous job in building and growing its economy over the last 25 years. The foreign investments play an important role in that,” he continued.

To create the right environment for attracting foreign investment in the post-COVID-19 world, part of what Vietnam could do is make sure it will continue to promote the rule of law and, through its legal policies and infrastructure, send signals that foreign investors and businesses are welcome in the country, the diplomat said.

Vietnam could also make sure that its tax policies are transparent, fair, and consistent, and that the regulatory environment is predictable.

When companies face challenges and disputes, they should have recourse to legal mechanisms, mediation, and access to Vietnamese policymakers so that they can get over those hurdles, he said.

“We’ll do this together, our businesses will do it together, and our governments will get together and talk about how we can together grapple with those issues. Globally, we face a lot of challenges to promote economic recovery but I think America and Vietnam can do great work together,” Ambassador Kritenbrink told Tuoi Tre News.

“I am confident that American companies and investments will play a key role in those attempts.”

The ambassador went on to underline that Vietnam is doing very well in attracting foreign direct investment (FDI) thanks to its young, dynamic, increasingly well-educated, and hard-working labor forces.

While praising the economic reforms and advancements the Southeast Asian country has made, Ambassador Kritenbrink noted Vietnam needs to continue to look at the regulatory environment and address concerns among foreign companies about its tax policies and transparency and predictability of regulations, as well as lowering the amount of time to get approvals.

“If Vietnam wants to continue to attract FDI and really wants to build the Industrial Revolution 4.0 economy, Vietnam has to keep these issues in mind and keep the interests of foreign investors and companies in mind,” the diplomat said.

Resolving its regulatory and legal issues will “reinforce Vietnam’s reputation as an attractive place for investment,” he added.

The ambassador listed reconciliation events, high-level diplomacy, and his trips to “beautiful” places across Vietnam as the most meaningful things that he has been engaged in since assuming office in 2017.

Kritenbrink made history as the first U.S. ambassador to visit a cemetery of Vietnamese soldiers killed in the American war in Vietnam when he came to the Truong Son National Martyrs’ Cemetery in the north-central province of Quang Tri in August 2019.

On Sunday, he also paid the first visit of a U.S. ambassador to the Ho Chi Minh City Martyrs’ Cemetery in District 9.

“One of the things that I hope I can do as the American ambassador is continue to build a strong foundation so that we'll have a great future together, so that we'll never again face a point in the future between the United States and Vietnam where some kind of misunderstanding leads to conflict between us,” he said.

“I’m hoping that through these events designed to show great respect for Vietnam and promote reconciliation, we can make a small investment in our future as well.”

With the U.S. presidential election coming up this November, Ambassador Kritenbrink reaffirmed that Vietnam can be confident in the United States’ continuing to deliver on its commitments in the East Vietnam Sea under any administration, as evidenced by its consistent foreign policy in the past decades.

“We continue to believe in upholding international law, peaceful resolution of disputes, and freedom of navigation. We believe that vital waterways like the East [Vietnam] Sea are crucial to regional and global economic growth,” the ambassador added.

“We believe that all countries, including the United States, are more secure when we all play by the rules,” he told Tuoi Tre News.

Ambassador Kritenbrink said he has great confidence that America’s national interests, including those in the East Vietnam Sea, are enduring and will remain so under any administration.

“Those are not going to change,” he underlined.