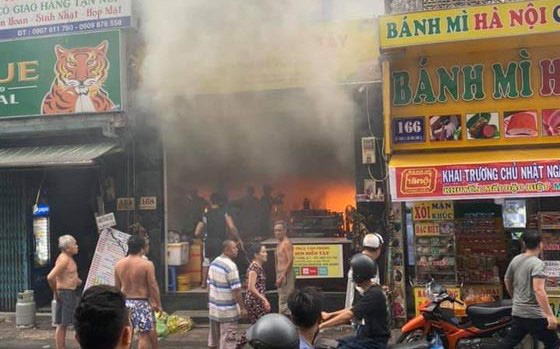 Firefighting police in Ho Chi Minh City were able to rescue seven people in a family after a fire broke out at a diner located in the city’s ‘backpacker area’ on Friday morning.

The flames hit a two-story diner on De Tham Street in Cau Ong Lanh Ward, District 1 at around 6:45 am, according to preliminary information.

Local residents first noticed smoke coming out of the venue and joined hands to put out the flames, but were not able to keep them under control.

Several fire trucks and dozens of firefighting officers later arrived at the location to extinguish the blaze and rescued seven people in the family, including five adults and two children.

Initial investigation showed that the fire was caused by a gas leak.

No one was harmed in the incident, and no significant damage was caused to the facility.