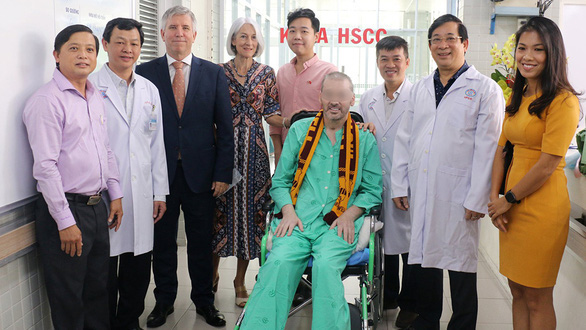 The insurance provider of Vietnam’s once most seriously ill novel coronavirus disease (COVID-19) patient, a British pilot who spent 115 days at two hospitals in Ho Chi Minh City, has pledged to pay for his remaining treatment costs of over VND1 billion (US$43,200) after having paid VND3.5 billion ($151,000) earlier.

The British Embassy in Hanoi said in a response to the Vietnamese Ministry of Health that patient No. 91, the moniker given to the 43-year-old Briton by public health officials when he fell ill in March, had returned home safely, and his insurer would pay for his remaining treatment fees.

The man arrived in the United Kingdom on Sunday, according to the Vietnamese ministry.

Cho Ray Hospital in Ho Chi Minh City also received a letter of confirmation on the same day that the patient's treatment expenses would be paid for by his insurer.

The ministry said the hospital is calculating the total treatment costs for the patient since his transfer to Cho Ray until July 11.

Meanwhile, his final stage of treatment at the infirmary mainly involved functional and nutritional rehabilitation, and muscle and lung rehabilitation, so the total costs are estimated to be no more than VND1.2 billion ($51,800).

Earlier, his insurance provider paid VND3.5 billion ($151,000) worth of his COVID-19 treatment at the Ho Chi Minh City Hospital for Tropical Diseases between March 18 and May 22.

The Briton has been the most critical COVID-19 patient in Vietnam so far.

Dr. Tran Thanh Linh, deputy head of the intensive care unit at Cho Ray Hospital, pointed out “huge effort and energy” had gone into saving the man, who was given the country’s best equipment.

The Vietnam Airlines pilot was confirmed as the country’s COVID-19 patient No. 91 following his diagnosis in mid-March.

His conditions deteriorated shortly after that, putting him in a coma and his life in jeopardy a few times.

Dozens of Vietnam’s top intensive care specialists at one point considered that only a lung transplant would save him from death after the virus left 90 percent of his lungs damaged and nonfunctional.

Beyond their expectations, medication and other medical care gradually improved his health in the following weeks.

The Scotsman was transferred to the intensive care unit at Cho Ray Hospital on May 22, still comatose and with severely damaged lungs, after being cleared of the coronavirus following his treatment at the Ho Chi Minh City Hospital for Tropical Diseases.

On June 3, doctors gave the green light to disconnect the patient from an ECMO machine, a form of life support only used in the most extreme cases, which he had been on for nearly two months.

A CT scan showed that nearly 90 percent of his lung capacity had recovered by that time.

The patient was transferred from the intensive care ward to the physical rehabilitation unit of Cho Ray Hospital on June 21.

As of Monday, Vietnam had gone 88 straight days with no community transmission of the coronavirus.

The country has so far confirmed 372 cases of COVID-19 and zero deaths, while 350 of the patients have been cleared of the pathogen.