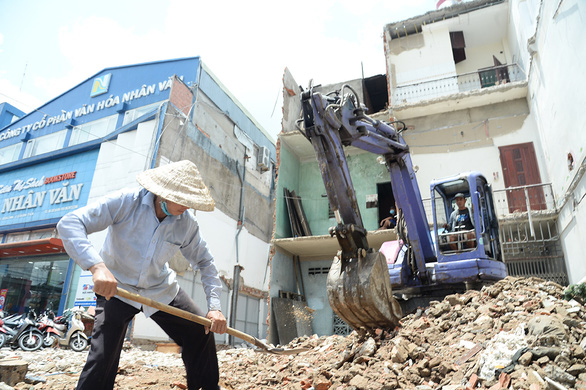 Site clearance is taking place on a large scale in District 3 and Tan Binh District, Ho Chi Minh City to serve the construction of the Ben Thanh – Tham Luong metro line, the second of its kind in the city.

The project, approved in 2010, has been repeatedly delayed due to sluggish ground clearance and problems with capital disbursement.

Ho Chi Minh City is urgently wrapping up the project’s site clearance so that demolition works can commence in October.

It is estimated that about 600 households along Cach Mang Thang Tam Street in District 3 and Truong Chinh Street in Tan Binh District will have parts of or their houses destroyed for the site clearance.

Tran Thi Bach Dao, the owner of a residence at 13 Truong Chinh Street in Ward 11, Tan Binh District, said that her house was reduced by almost a half of its original size.

Dao said she first heard about the metro project in 2012, but it was not until 2017 that she got the very first offer of ground compensation for the site clearance.

After several discussions with the local authorities, her family eventually accepted the compensation rate of VND150 million (US$6,475) per square meter earlier this year and have resized their house from 88 square meters to 48 square meters to make way for the project.

“Anyway, this is a key road project. Its completion will also benefit my family so we quickly agreed [to the offer],” Dao said.

Unlike Dao’s, Pham Phan Phuoc Hai’s house at 23 Truong Chinh Street in the same ward is scheduled to be knocked down almost completely.

The house, which will be left with only 1.2 square meters from its original total area of 40 square meters, will soon become uninhabitable.

Hai is looking to buy a new house in the city’s suburb as the clearance compensation amount is not enough for his family to find an equivalent residence near their current place.

The ground clearance also means Hai will have to rebuild his family’s heirloom business of selling traditional medicine from scratch as many customers will find it difficult to access his new place.

As many as 324 out of 356 households in the areas to be cleared for the construction of the Ben Thanh – Tham Luong metro line in Tan Binh District have given a nod to the offers for the site clearance, according to Nguyen Tan Tai, head of the district’s board for clearance compensation.

Tai said that in June, the district handed over cleared grounds for the construction of two out of six terminals planned for Tan Binh.

The district plans to hand over three more cleared sites at the Bay Hien intersection, on Nguyen Hong Dao Street, and at the Ba Queo fork in September, and one more on Pham Van Hai Street by the final quarter of this year.

Households affected by the site clearance can select two options for resettlement, according to Tai.

The first option is to move into an apartment in one of the three apartment buildings — Bau Cat and Tan Tru in Tan Binh District and Tan Thoi Nhat in adjacent District 12.

The other choice is to receive an additional five percent to the clearance compensation offer to buy new houses in other places.

So far, 50 households in Tan Binh have chosen the second option while seven have considered the first one, Tai said.

In addition to those in Tan Binh District, the investor has taken over the grounds for the construction of some terminals in District 10 and Tan Phu District as of Friday, according to Le Van Khoa, director of the management board of the metro line No. 2.

Khoa expected that the works on site clearance can be completely finished by the end of this year for the project's construction to start in the third quarter of 2021.