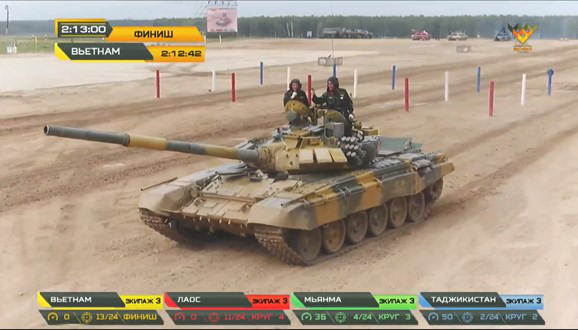 Vietnam won the gold medal in the Group 2’s final of the tank biathlon category at the 2020 International Army Games in Russia on Friday afternoon.

At the Alabino Military Training Grounds outside Moscow on Friday afternoon, Vietnam participated in the relay race of Group 2, alongside Myanmar, Laos, and Tajikistan.

The tanks with three-member crews had to race to the finish line while shooting at targets and overcoming obstacles along the way.

Vietnam finished in the shortest time of two hours, 12 minutes and 47 minutes, and hit 13 out of 24 targets.

It was the third time that Vietnam had taken part in the tank biathlon event but the first time it has won.

The 2020 tank biathlon has 16 crews divided into two divisions based on their results last year.

Abkhazia, Congo, Qatar and South Ossetia were competing for the first time this year.

The finals of Group 1 will be competed by Russian, China, Belarus and Azerbaijan at 3:00 pm on Saturday.

This year’s Army Games are taking place from August 23 to September 5, attracting over 6,000 military personnel from 39 countries from Europe, Asia, Africa, and Central and Latin America.

The country finished third in the safe route event on August 30.