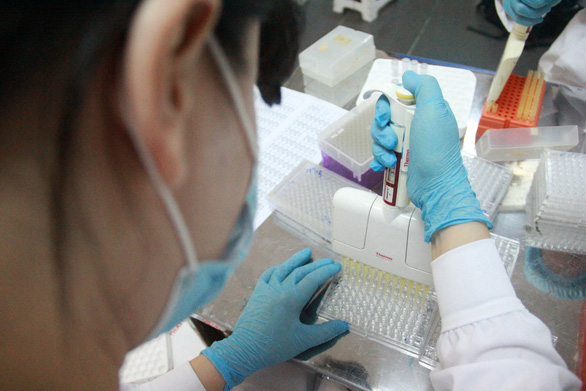 A sexagenarian in Da Nang has retested negative for the novel coronavirus twice after having initially tested positive for it twice as well, according to the municipal Department of Health.

P.N.S., 64, who lives in Ngu Hanh Son District, Da Nang, developed fever and coughing so he was admitted to Da Nang C Hospital on Saturday, the health department said in a report on Sunday evening.

His sample was taken for COVID-19 testing at the hospital at 7:30 pm on Saturday. The result returned positive on Sunday morning.

On Sunday morning, his same sample was sent to the Da Nang Center for Disease Control for a retest which came back positive.

S. was then transferred to a field hospital in Hoa Vang District, Da Nang.

On Sunday, two of his samples were taken again by medical workers at the Hoa Vang field hospital and Da Nang Center for Disease Control.

The center conducted tests on the samples using the real-time PCR technique, which looks for the antigens – substances entering the body and starting a process that can cause disease.

Both these tests returned negative for the virus.

He continued to undergo an antibody test on Sunday afternoon, which showed him positive.

All this indicated that S. once contracted the pathogen but he is now negative for the coronavirus, the Da Nang Department of Health said in its report.

More tests are being done on the suspected case and the health department says it will ask the Ministry of Health for advice.

Given this result, Da Nang has recorded no community-based infections for a week, evidence that the virus has been kept at bay in the beach city thanks to aggressive contact tracing for over a month.

On a national scale, Vietnam has documented zero domestic cases for four days straight, according to the health ministry.

The country announced 10 recoveries on Sunday, all in Da Nang.

It has logged 1,049 coronavirus cases, including 691 local infections, since the virus first hit in January, with 815 patients having recovered and 35 having died as of Monday morning.

Most of these cases have been traced back to the coastal city.

A total of 39,975 people are being quarantined in Vietnam at the time of writing.