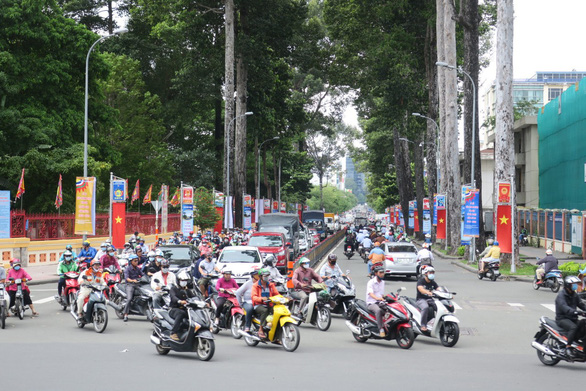 A section of Dinh Tien Hoang Street in Binh Thanh District, Ho Chi Minh City was on Wednesday renamed for the late general Le Van Duyet on the occasion of his 188th death anniversary.

The section stretches 947 meters from the Bong Bridge to Phan Dang Luu Street.

At one end of the street is the Lang Ong Ba Chieu Temple, where the tombs of the hero and his wife are placed.

Le Van Duyet (1764-1832), a high-ranking mandarin under the Nguyen Dynasty (1802-1945), made great contributions to the development of the southern region of Vietnam.

The renaming ceremony took place on Wednesday morning on the occasion of the 188th death anniversary of General Le Van Duyet.

The anniversary was attended by his descendants and local residents and it will last until Friday.

“It’s a great honor for the Le Van family that local authorities decided to change the name of a section of Dinh Tien Hoang Street to Le Van Duyet Street,” said Le Van Hoa, a descendant of the sixth generation of the general.

After the ceremony, Binh Thanh District’s authorities will provide guidelines and support for residents to adjust and supplement their ID cards, papers, and family books to ensure their legitimate rights, said Hoang Song Ha, vice-chairman of Binh Thanh District.