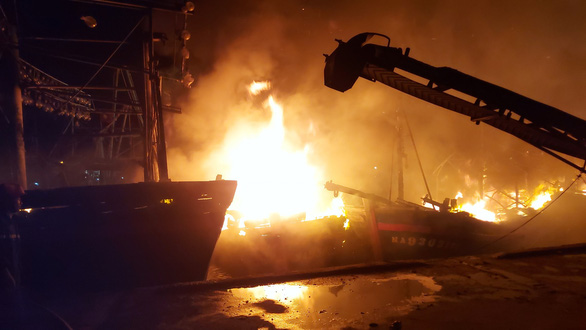 At least four fishing boats anchored at Lach Quen fishing port, located in Quynh Luu District in the north-central province of Nghe An, were on fire for an unknown reason on Friday night.

Local fishermen sighted smoke and fire from a fishing boat at the port at around 8:00 pm on Friday.

As the fishing boat where the fire broke out contained diesel fuel, the fire quickly spread to at least three nearby boats.

Several other fishing vessels had to move away to avoid the fire.

The blaze was eventually put out at 11:30 pm after over three hours.

The serious incident attracted a huge number of onlookers.

There has been no report on casualties in the incident.

Many fishing boats returned to Lach Quen, the largest fishing port in Quynh Luu, on Friday to avoid the influence of a tropical convergence zone and cold front in the East Vietnam Sea, which developed into a tropical depression late on Friday night.

Below are some photos of the fire happening on the fishing boats anchored at Lach Quen.