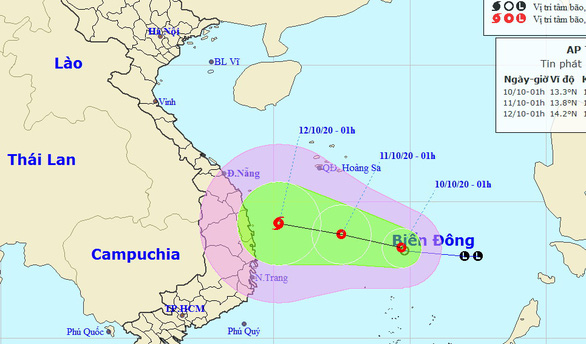 A low-pressure area having formed in the East Vietnam Sea and developed into a tropical depression on Friday night is forecast to pick up more strength in the next 24 hours, as it heads toward central provinces.

As of 1:00 am on Saturday, the tropical depression was located 230 kilometers north of Song Tu Tay Island in Vietnam's Truong Sa (Spratly) archipelago, with winds at 40 to 50km per hour, according to the National Center for Hydro-meteorological Forecasting.

In the next 24 hours, it will travel west-northwest at a velocity of ten kilometers per hour and potentially become stronger.

The tropical depression will be at an area 350 kilometers east of the south-central Vietnam coast from Binh Dinh to Khanh Hoa Provinces by 1:00 am on Sunday, with winds at 40 to 60km per hour and gusts at up to 90km an hour.

It is expected to continue heading west-northwest at ten to 15km per hour in the next 24 to 48 hours and pick up strength.

The highest rainfall was recorded at 625 millimeters in north-central Quang Tri Province, followed by 616 millimeters in central Thua Thien-Hue Province.

Under the influence of a tropical convergence zone and cold front, heavy downpours are forecast to continue battering the localities between north-central Ha Tinh Province and south-central Phu Yen Province on Saturday.

Torrential rain is expected to lash central and south-central provinces from October 11 to 13.