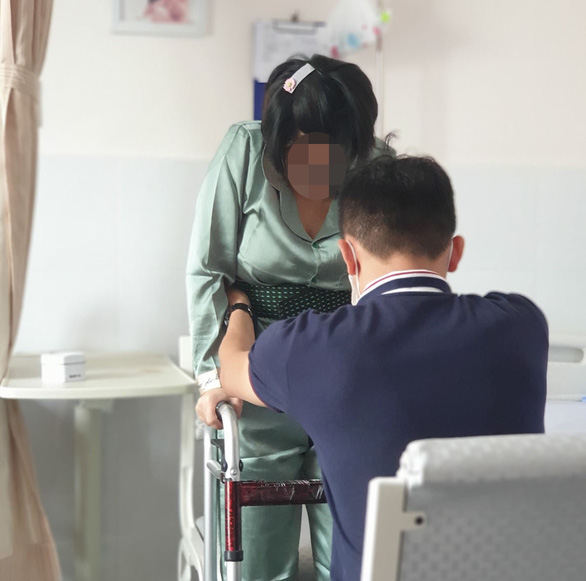 Mekong Maternity Hospital in Ho Chi Minh City fired one of its doctors after a 29-year-old pregnant woman claimed the institution had ignored her allergy to anesthetics, causing her to become paralyzed after giving birth.

N.T.T.T., a 29-year-old from the Central Highlands province of Lam Dong, and her family met representatives from the Mekong Maternity Hospital in Tan Binh District three times for resolving the issue.

According to her complaint, T., in the company of her husband, was admitted to the hospital on November 2, 2020.

The couple requested a cesarean section due to a variety of pre-existing conditions, including gestational diabetes, an allergy to anesthetics, and a narrow pelvis.

T. informed a nurse at the hospital of her allergic reactions to local anesthetics during prior surgeries on her legs and teeth.

She was then marked with a sticker to alert medical staff of the condition.

While in the preoperative room, T. reminded medical staff of her allergy to local anesthetics again.

However, once in the operating room, Dr. Le Quoc Hai, head of the hospital’s resuscitation anesthesia department, changed the general anesthesia plan to local anesthesia, disregarding T.’s medical history of allergic reactions and the preoperative diagnosis results, and without her family’s consent, T. said.

According to T.’s family, Dr. Hai gave T. a local anesthetic even though she begged him not to.

After being injected with local anesthetics into the spinal cord, T. had strong convulsions and vomited during the surgery.

The left half of her body was completely paralyzed after the cesarean section.

The Mekong Maternity Hospital consulted Gia Dinh People’s Hospital in Binh Thanh District and sent T. for specialized tests, the results of which showed that she had no problem.

By that time, her maternity clothes from the preoperative period, including the one marked with a sticker, had been taken away.

According to the woman, the doctor did not give her constant physical therapy, which slowed her recovery.

Currently, T. is still suffering from paralysis on the left side of her body, trauma, insomnia, and panic at night.

Dr. Le Minh Nguyet, the Mekong Maternity Hospital’s head of the general planning department, told reporters on Wednesday afternoon that the hospital had accepted blame for what they called “a medical incident.”

As soon as the incident occured, the hospital reported it to the Ho Chi Minh City Department of Health, then convened a professional medical meeting and reported its findings to the municipal health department, Nguyet said.

“Dr. Hai wanted the best for the woman but his judgment was inaccurate, causing unexpected problems,” Dr. Nguyet said.

“The members of the hospital's professional board concluded that Dr. Hai was at fault."

Meanwhile, the hospital’s obstetricians have full confidence in its anesthetists’ anesthesia plan, except for special contraindications, as well as the medical team in charge of T.’s caesarean section, Nguyet emphasized.

Nguyet denied T.’s report that Dr. Hai insisted the local anesthetic injection despite the woman’s pleas, as well as the claim that nurses collected her preoperative clothing.

“This is the hospital’s fault and negligence, but at no point did the hospital ignore the patient,” Dr. Nguyet said.

According to Nguyet, the doctors have yet to find the reason for T.’s paralysis, despite the conclusion of the Gia Dinh People’s Hospital that she had no problem.

There had been cases of abnormal complications similar to T.’s, but to a less serious degree, Nguyet said.

It is also not clear when T. will totally recover from her condition.

“The hospital will support Mrs. T. with physical therapy until she recovers," Dr. Nguyet said.

"We love T. very much and sincerely apologize.

"We are willing to listen to and work with T. and her family.”

At the end of Wednesday’s press briefing, the hospital announced that it had asked Dr. Hai to resign.