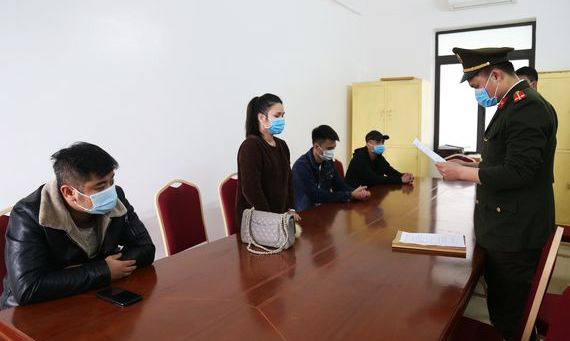 Four fined over $4,300 for unfaithful medical declarations in northern Vietnam

Four people have been fined a total of VND100 million (US$4,335) for failing to properly perform the mandatory procedure of medical declaration in northern Quang Ninh Province as local authorities are beefing up measures to contain a new wave of COVID-19.

They intentionally avoided health inspection and gave incorrect medical declarations at a COVID-19 control point set up near the Da Vach Bridge on National Highway 17B in Mao Khe Ward, Dong Trieu Town.

Police in Dong Trieu Town issued each of the four people an administrative fine of VND25 million ($1,088).

Vietnamese law stipulates that a fine ranging from VND20 million ($870) to VND30 million ($1,305) shall be imposed on anyone who fails to comply with regulations on health declaration for infectious disease control before entering or leaving epidemic areas.

Vietnam’s number of local infections in a new coronavirus wave, which began on January 28 after the country had gone almost two months without any domestic transmission, increased to 240 on Monday morning.

Of the figure, 188 patients were documented in Hai Duong, 25 in Quang Ninh, 15 in Hanoi, four in Gia Lai, three in Bac Ninh, two in Hoa Binh, and one each in Ho Chi Minh City, Binh Duong, and Hai Phong.

The patient tally mounted to 1,819 cases, including 933 domestic infections, as of Monday morning, with 1,457 recoveries and 35 deaths, according to the Ministry of Health.