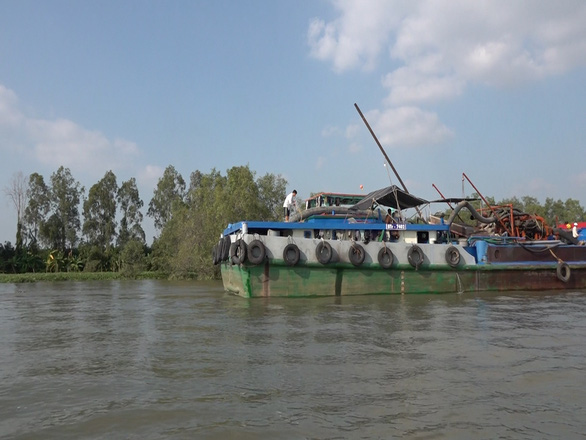 Despite facing furious opposition from local residents, a big barge equipped with dredgers is publicly extracting sand off the Tra On River in Vinh Long Province, located in Vietnam's Mekong Delta.

The barge has mined sand on the river for a few days, residents of My An Village in the province's Binh Minh Town, said in a report to Tuoi Tre (Youth) newspaper on Tuesday.

As witnessed by Tuoi Tre, a massive boat numbered LA-07135 appeared at the junction of the Hau River and the Tra On River.

It was accompanied by another boat with registration number BTr-7402, with a perceived load capacity of hundreds of cubic meters of sand.

During the daytime, these vehicles publicly anchor their dredging hoses down the bed of the river and run their clamorous engines, which upsets residents living just 100 meters away.

After spotting the reporters, the boat crew quickly retracted the suction hoses and drove the vehicles off the scene.

“I was informed that the boats started mining sand near my house yesterday," said Huynh Thi Tay, 46, from My An Village.

"I shouted but they did not seem to bother."

Tay quickly reached out to the commune authorities and the local bureau of natural resources and environment. Two officers arrived, only to inform Tay that the boats had just got their sand mining permit issued.

A few more sand-mining boats have pulled up near mangrove apple trees that Tay planted, which caused them to collapse.

“As far as I know, authorities only issue sand-mining permits to excavator boats, not dredgers extracting sand near the shore like this," Tay said.

"It will cause erosion and harm the residential areas."

The authorities will check the circumstances, Nguyen Van Hieu, director of the Vinh Long Department of Natural Resources and Environment, said on Tuesday.

Meanwhile, Bui Minh Chanh, director of the bureau of natural resources and environment of Binh Minh Town, said officials and specialists will be sent to the scene for investigation.

“The use of suction hoses for dredging sand near the shore is prohibited,” Chanh declared.