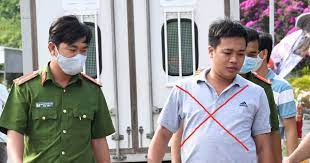 Police in Chau Thanh District, located in Vietnam’s southern Tra Vinh Province, on Sunday conducted the urgent arrest warrant for a 22-year-old local man who had often blocked female students’ way to show off his genitals and touch their private parts.

According to the initial investigation, from January to March, many girls aged 13 to under 16 years old were stopped by a young man while on their way between home and school on the section of National Highway 53 through Phuoc Hao Commune in Chau Thanh District.

After stopping the girls, the man exposed his genitals and touched private parts on the girls’ bodies.

The recurring incident caused frustration and anxiety among the local female students when going to school through this area.

After a time of investigation, the police force arrested Toan when the man was conducting the lewd act on a 15-year-old female student on her way to school on Saturday morning.

At the police station, Toan admitted his crime, confessing he wanted to satisfy his sexual needs, with a total of six female students in Chau Thanh District being his victims.

Currently, the police are working on procedures to handle the case in accordance with the law.