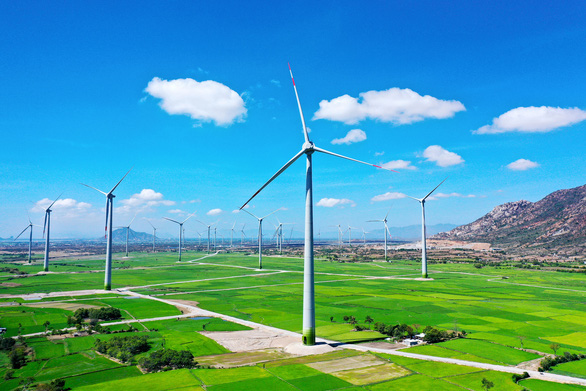 Vietnam now possesses the largest renewable energy farm complex in Southeast Asia, generating a total power output of up to one billion kWh per year, after the debut of a wind power plant in south-central Ninh Thuan Province on Friday.

The inauguration ceremony for phase 3 of the plant, built at a total cost of VND4 trillion (US$173 million), was conducted by Trung Nam Group, the developer, with the attendance of officials from the provincial authorities and relevant agencies.

This phase has a capacity of 48 MW and generates a power output of 134 million kWh per year, bringing the plant’s total capacity to 151.95 MW and its total annual electricity production to 423 million kWh, the Vietnam News Agency reported.

The plant’s electricity will be connected to the national power grid through some transformers that connect to the 220kV Thap Cham station.

With this wind power plant and a $260-million solar power plant in operation with 705,000 solar cells with a capacity of 204 MW, the complex has a total capacity of over 350MW and is able to produce 950 million kWh to one billion kWh annually.

According to statistics, Ninh Thuan is a province with wind potential in 14 regions, covering a total area of ​​about 8,000 hectares, mainly in the three districts of Ninh Phuoc, Thuan Nam, and Thuan Bac.

In addition to being less affected by storms, Ninh Thuan has a steady wind volume during 10 months in a year, ensuring the complex’s stable power generation from wind turbines.

Another advantage is that Ninh Thuan is endowed with a large amount of solar radiation, with a total number of sunlight hours amounting to 2,837.8 hours per year on average, the highest in the country.

Consistency in solar radiation between different seasons creates good conditions for efficient exploitation of solar energy in the province.