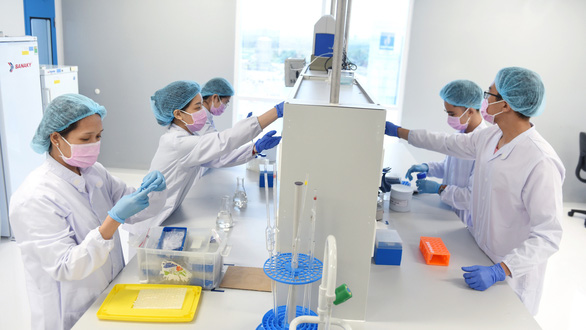 Among the four coronavirus vaccines under development in Vietnam, Nano Covax is slated to be registered for emergency approval next month as an effort to make the first made-in-Vietnam vaccine available soon amid rising COVID-19 cases.

The registration of the vaccine is expected to be done between August 15 and 20, as announced at a meeting held on Friday between Prime Minister Pham Minh Chinh and representatives from the ministries of Health, and Science and Technology, and from the COVID-19 vaccine developers in Vietnam.

In the near future, four vaccines will be manufactured in Vietnam, of which two are domestically developed and the others are made based on technology transfer, the meeting was told.

Of these vaccines, Nano Covax, developed by Ho Chi Minh City-based Nanogen Pharmaceutical Biotechnology JSC, has seen the fastest development progress, with the phase-3 trial results available between August 4 and 19, said a report at the meeting.

Local experts will coordinate with their counterparts from the World Health Organization (WHO) to assist the vaccine manufacturer in all necessary preparations, including preliminary assessments of the vaccine immunogenicity tests, before submitting the vaccine registration dossier to competent bodies for emergency approval, the health ministry said.

The ministry has established a special working group on clinical trials and development of COVID-19 vaccines, led by Deputy Minister Tran Van Thuan, to boost the progress of all the vaccines under development in Vietnam.

After Nano Covax, the second fastest-growing vaccine is Covivax developed by the Nha Trang Institute of Vaccines and Medical Biologicals, which will issue a mid-term report on July 27 before entering the second-phase clinical trial of the vaccine.

Among the two vaccines based on technology transfer, one will come from cooperation between Vietnamese conglomerate Vingroup and U.S.-based Arcturus Therapeutics, and the other will result from an agreement between the two Vietnamese developers, AIC and Vabiotech, and their Japanese partner, Shionogi.

In addition, under agreement with the Russian Direct Investment Fund, Vabiotech has packaged Russia’s Sputnik V vaccines since July, with an expected capacity of five million doses per month, getting closer to the transfer of production technology with a scale of 100 million doses per year.

It is expected that WHO experts will come to Vietnam by the end of July to support the health ministry in research, development, clinical trials, appraisal and evaluation of all domestically produced as well as imported vaccines.

Vietnam has set a target of securing 150 million vaccine doses to vaccinate two-thirds of its population of about 98 million people this year.

As of Saturday, nearly 4.5 million COVID-19 vaccine doses have been administered nationwide, and the numbers of people receiving the first and second shots have amounted to over 4.12 million and more than 353,000, respectively, the health ministry reported.

The ministry also confirmed 3,991 new COVID-19 infections on Saturday morning, down from 3,409 cases on Friday evening. The country has recorded 86,957 patients overall since early 2020, including 15,536 recoveries.

Of the latest cases, 2,070 were detected in Ho Chi Minh City, where authorities have extended social distancing measures until August 1, instead of ending them on Saturday as earlier projected, in an effort to curb rising COVID-19 cases.

Since April 27, when the pandemic’s fourth wave appeared in Vietnam, the country has documented 83,242 domestic infections.