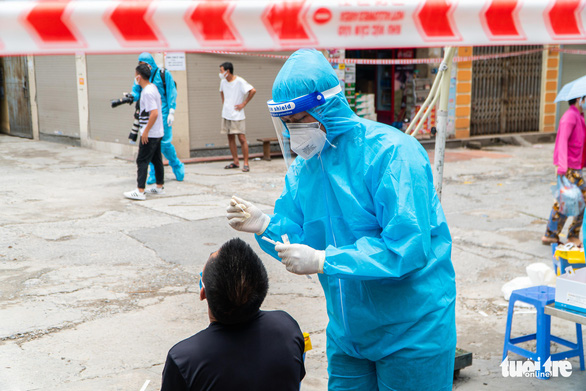 -- Vietnam's National Assembly Chairman Vuong Dinh Hue expressed his hope that the United Nations will further support his country in its fight against COVID-19 and post-pandemic economic recovery at a reception for outgoing UN Resident Coordinator in Vietnam Kamal Malhotra in Hanoi on Thursday, according to the Vietnam News Agency.

-- Over one million AstraZeneca vaccine shots are scheduled to arrive in Vietnam on Friday, a source told Tuoi Tre (Youth) newspaper. About 12 million vaccine doses will land in the country in August and September, the same source said.

-- Authorities sectioned off a 400-meter stretch on Doi Can Street in Ba Dinh District, Hanoi on Thursday evening following the detection of 16 COVID-19 cases there.

-- Vietnam will try its best to roll out the first locally-made coronavirus vaccine in September, Prime Minister Pham Minh Chinh said at a meeting on Thursday.

-- A 96-year-old woman was discharged from the hospital on Thursday after she beat COVID-19, doctors in Binh Phuoc Province in southern Vietnam said the same day.

-- Officials on Phu Quoc Island off Kien Giang Province in southern Vietnam have allowed six French students to leave the island for Ho Chi Minh City, where they caught a flight back to their home country, following a request by the French Consulate General in Ho Chi Minh City. The island has been put under movement restrictions over COVID-19 for weeks.

-- K-12 schools in Ho Chi Minh City are expected to organize the opening of the 2021-22 academic year virtually in mid-September, Nguyen Van Hieu, deputy director of the municipal Department of Education and Training, said on Thursday.

-- "Six people, including a child, were killed in a mass shooting in the city of Plymouth in southwest England on Thursday evening, in an incident described by the British Home Secretary as 'shocking'," Reuters reported.