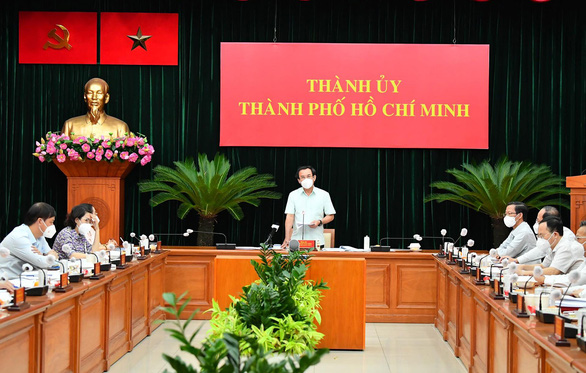 Ho Chi Minh City needs to have more time to put the COVID-19 pandemic under more effective control, said secretary of the local Party Committee Nguyen Van Nen at a conference on Saturday.

The Party Committee has agreed to the city’s plan on driving back the pandemic while maintaining economic growth, but currently except for a few districts, most other localities need some more time after September 15 to achieve the epidemic control targets, Nen said.

Nen assigned the local Steering Committee for COVID-19 Prevention and Control to prepare a report to the central government asking for more time for the city to stall the coronavirus spread.

The city may better contain the virus by the end of this month, instead of September 15 as targeted in a recent resolution of the national government, Nen told the conference.

World experience shows that it is difficult to eliminate all coronavirus infections at a given time and that restrictions cannot be maintained beyond the tolerance of the people and the economy, the Party official said.

But the loosening of such measures should depend on actual epidemic developments, he added.

Nen emphasized that ‘safety first’ is the city’s general motto.

“Restrictions will be relaxed in the locales that satisfactorily meet epidemic prevention requirements,” he stated.

A location should be chosen to pilot such loosening that helps the city shore up its economy under ‘new normal’ conditions, Nen suggested.

He also requested city authorities to improve the capability of its health system, considering this one requisite for the city to live with the virus.

The city needs to attract private healthcare resources for the COVID-19 fight through appropriate policy, and to combine Western and traditional medicine in treating coronavirus patients, Nen said.

There should be an urgent housing policy for workers to help ease the pressure on many cramped houses for rent in the southern city.

Ho Chi Minh City has been in a one-month extension of strict travel restrictions since mid-August, under the prime minister’s Directive No. 16.

The directive bans gatherings of more than two people in public and requires all residents to stay indoors and only go outside with appropriate reasons.

The city had earlier imposed social distancing regulations at various levels since May 31.

Local authorities are beefing up COVID-19 vaccination to cover all residents aged 18 and older by September 15, as a condition for the city to partially reopen.

By Saturday, the numbers of people receiving the first and second vaccine doses in the nine-million-strong city had reached some 6.48 million and 1.23 million, respectively, while the corresponding figures of the country had amounted to about 22.36 million and 4.74 million.

In Ho Chi Minh City, 292,391 coronavirus patients and 11,792 fatalities have been recorded, the highest numbers in the country, followed by southern Binh Duong and Dong Nai Provinces.