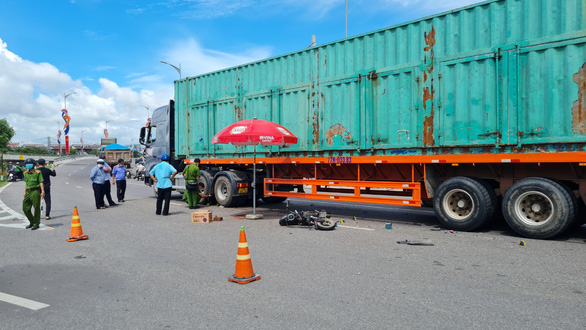 A serious traffic accident between a tractor-trailer and an electric bicycle claimed the lives of two girls in the south-central Vietnamese province of Binh Dinh on Friday morning.

The tractor-trailer, steered by 36-year-old Tran Nam Binh on National Highway 19 in the direction from Quy Nhon Port to Tuy Phuoc District, hit the electric bicycle at the Dong Da Street - Ha Thanh 1 Bridge roundabout at around 10:00 am on Friday.

The collision killed 14-year-old H.G.C., one of the two travelers on the electric bike, on the spot, while her peer was declared dead after hospitalization.

The electric bicycle was stuck under the tractor-trailer and completely deformed.

Driver Binh fled the scene following the accident, according to witnesses.

As the accident drew large gatherings and temporarily obstructed traffic, functional forces were mobilized to the site to regulate circulation and handle the scene.

They handed over the bodies of the victims to Binh Dinh General Hospital for necessary tests and started investigating the cause of the deadly accident.