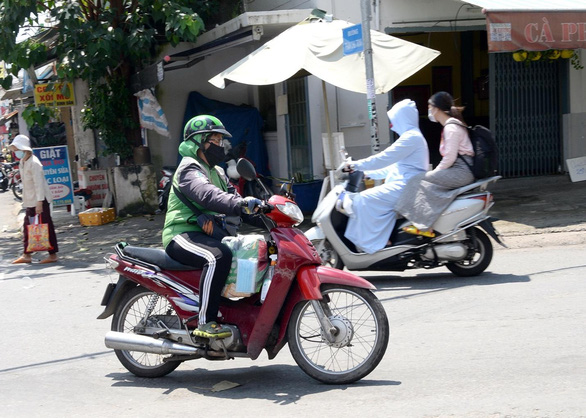 The journey from a cook to an app-based ridesharing partner is not easy for a woman in Vietnam, especially when she is in her fifties, just ask Nguyen Thi Nguyet Hong.

Hong took her parents and many of her relatives by surprise when she decided to stop working as a cook to work as a driver for GoViet, now Gojek.

Despite working around the clock since taking the new job, she always sees the bright side and inspires everyone who knows her.

One day, Hong, 49, gave Tuoi Tre (Youth) newspaper a brief interview after she had just completed a delivery order around noon and stopped to take a roadside rest.

Hong was working as a cook at a small restaurant three years ago when she read a job announcement looking for bike partners from GoViet, an app for food ordering, commuting, digital payments, shopping, hyper-local delivery, and some other services.

The job advertisement seemed to make her work as a cook for so many years boring.

Considering this a life-changing opportunity, Hong decided to quit her cooking job to become a rideshare driver for Gojek.

Her mother originally disagreed with her decision as she did not want to see the daughter traveling so hard all day, but Hong gradually persuaded her mother.

She moved from her house in the outskirt district of Cu Chi to Thu Duc City under Ho Chi Minh City to hire an apartment to do the new job more conveniently.

“I explained to my mother that being a tech-based rideshare partner is very different from being a traditional motorbike taxi driver,” said Hong.

“I do not have to wander about the streets with my motorbike to find customers as my mother imagined, all I need to do is open the Gojek app to browse and choose suitable bookings for commuting or delivery."

“The transport app has a GPS system, with the information of destinations and clients displayed clearly in the app. When coming back home for the weekend, I told my mother how I did my job and some interesting stories I had while driving the customers,” Hong recalled how she persuaded her family in her first days into her new career.

Thanks to her efforts, Hong’s mother changed her mind and supported her daughter’s decision.

She took a fresh look at technology drivers. In addition to that, Hong’s earnings from the new job not only help her take care of herself but also allow her to provide for her parents.

She starts work at 7:00 am every day and finishes late at night. She once received a booking from a client at midnight.

Hong drives all day, with only a short break for lunch at a roadside restaurant where she and some of her fellow drivers sit together, have a coffee, and chat.

Sometimes there are so many bookings that she forgets to have lunch altogether.

Hong was worried to accept delivery orders with a long distance when she was a newbie in the job for fear of dangers.

She now sets a specific goal each day for herself and then tries her best to meet the target.

Getting used to the rideshare job, she feels uncomfortable when she misses a day for any reason.

“I have met various kinds of people while doing my job as a tech-based motorbike taxi driver," said Hong.

"I always try to serve best while reminding myself to stay alert against risks.

"I found them suspicious so I decided not to pick them up.

"I canceled the booking and told some of my friends nearby to avoid them as well."

Hong feels she has a special connection with being a tech-based driver for the last three years.

She can now travel to several places in the city instead of being confined to a small kitchen as before.

The new job has transformed her into a more positive person with the motivation of earning money and moving forward.

“The job has become my passion now, and I live with both happiness and sadness because of it,” said Hong.

Having her second family

Working as a rideshare driver, Hong spends much more time working outside than at home.

She has found out about her second family beside other peers.

Despite their different situations and conditions, sharing a job makes them sympathize with one another.

When someone runs into any problem, the others are willing to give a hand right away.

One time one male coworker had a traffic accident, Hong just grabbed a jacket and drove to the scene, rushing him to Thu Duc General Hospital in the middle of the night.

“At the hospital, doctors asked me to change his clothes to prepare for an operation, and I felt extremely embarrassed as I am not married,” she recounted.

“Because of his life, I did what I was asked to.

Hong laughs at the question of what she plans for the future, saying she does not intend to get married for the time being.

She sees a family in her parents and colleagues.

The COVID-19 pandemic has had a huge negative impact on tech-based drivers like Hong for the last months.

“I just hope that the pandemic would phase out soon so everything can become normal again," the middle-aged woman said.

"Then we can continue to do our job, we can meet and support one another every day.

"I would like to remind my coworkers to protect themselves and their families carefully."