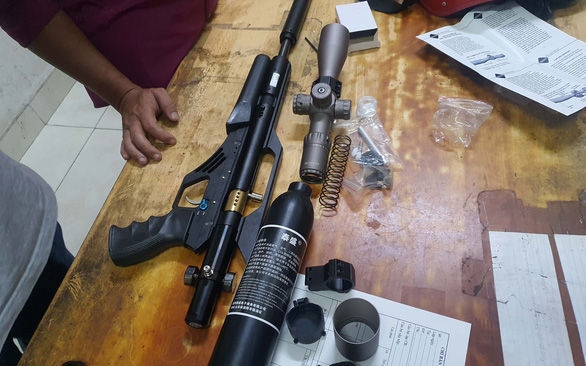 Airguns illegally put up for online sale in Vietnam

A series of websites, Facebook pages, and social media channels including YouTube and TikTok are illegally offering airguns for sale in Vietnam, with delivery service to be performed via express couriers, according to an exposé by Tuoi Tre (Youth) newspaper.

Among the online vendors of airguns is a YouTube account, 'Nam Anh Shop Phu Kien (…)', which often provides video clips introducing guns for sale in the ‘cash on delivery’ (COD) payment method nationwide.

Being asked by a Tuoi Tre reporter, posing as a customer, about the way to directly examine some guns, the trader, which provided three contact phone numbers, replied that such a request was impossible as airguns are among banned commodities.

“After buyers pay a deposit of a few hundred thousand dong [VND100,000 = US$4.4], the online shop will deliver guns to them and collect the balance,” the trader said.

When introducing an airgun priced at VND8 million ($352), including a delivery fee, Duy said the kind of gun, of Chinese origin, has a shooting range of 90 meters and is often used by hunters of birds and other prey including monkeys.

Duy said guns would be delivered in parcels labeled as 'household appliances' on the packaging to avoid detection by authorities.

On November 15, a Tuoi Tre reporter joined police officers in Thu Duc City under Ho Chi Minh City in an examination of two parcels delivered by a courier to a local receiver.

These parcels, carrying the 'household appliances' classification tag on their packaging, contained parts of an airgun using lead bullets.

The delivery worker told police that he simply shipped the parcels to the buyer’s address, without knowing what were actually inside them.

The ward police have sent these gun parts to a designated agency for verification and have launched an investigation to trace the gun seller.

Airguns are one of the types of shotguns and belong to the list of weapons that are governed by regulations on management and use of weapons and support tools, said lawyer Bui Quoc Tuan from the Ho Chi Minh City Bar Association.

It is a criminal offense to illegally manufacture, transport, or trade weapons and offenders can get a jail term of up to five years, the lawyer warned.

He also emphasized that carriers must be held accountable for the goods they transport.

Another lawyer from the same bar association, Tran Minh Cuong, said that all goods transport service providers must not deliver or transport banned commodities through postal networks.

“Vietnam’s Law on Post provides regulations on post staff’s responsibilities in inspecting goods deposited for delivery, but many post offices have ignored such rules, thus facilitating the trade and transport of banned goods,” lawyer Cuong commented.

The lawyer warned that post employees or delivery workers could be fined or treated criminally if investigators are able to prove that they have deliberately delivered prohibited commodities.

Police across Vietnam seized 79 airguns, spare parts for assembling such guns, 1,378 bullets, and many support tools and rudimentary weapons from November 5 to 16, the Ministry of Public Security reported.

In a related development, police in Dong Nai Province’s Long Khanh City on November 7 arrested a 35-year-old man, Dinh Ngoc Le Hoang Anh, who had fled away with an airgun while being investigated for child sexual abuse.

Anh, with three previous convictions, told police he had bought the gun from a seller on social media for VND4.5 million ($198).