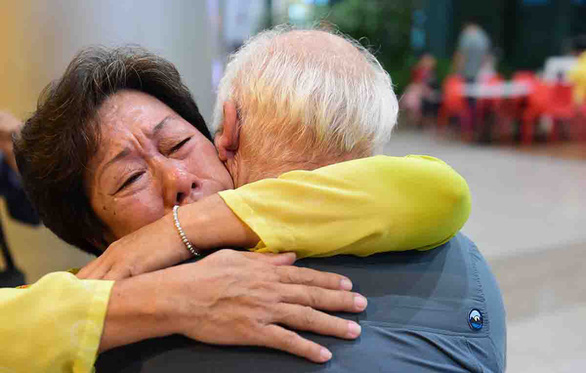 A former American soldier and his Vietnamese lover who met during the American war in Vietnam had an emotional reunion - their first in 50 years - in Ho Chi Minh City on Thursday.

Ken Reesing and Vu Thi Vinh met for the first time in December 1968, when Reesing had just been deployed to Vietnam to work at a logistics data service center inside a U.S. Army base in the southern city of Bien Hoa.

Reesing, then 22, would frequent the Enlisted Men’s Club inside the base where Vinh, then 16, worked as a bartender under a pseudonym, Thuy Lan.

The story of their fateful encounter and how the young couple were struck by love at first sight was first published on Vietnamese new site VnExpress on September 9, 2019.

As they began their courtship, the love birds would meet every weekend at a location close to the soldier's base. But their love never got the chance to develop into something more before the American soldier received an order to be repatriated in September 1969, three months earlier than initially scheduled.

The day before his departure, Reesing bought a pack of 50 envelopes, numbered each of them from 1-50, and gave them to his lover, promising her that he would find his way back to her when the last of the envelopes was sent.

They would keep in touch for years, with Vinh using up the pack of envelopes more quickly than they had expected by sending letters to Ken almost daily, the American soldier told VnExpress. By the end of 1969, Vinh had already begun using her own envelopes to send letters to Ken.

Their snail mail exchange only stopped when the U.S. began withdrawing its men from Vietnam toward the end of the war, which cut off the couple’s only means of communication to each other.

Reesing said he had considered re-enlisting, but there was no guarantee he would be deployed to Vietnam again when the U.S. was already pulling itself out of the costly war that ended in 1975. His family was also strongly against the idea.

Failing to keep the final promise he made to his Vietnamese lover was something that haunted Reesing for decades after the war, VnExpress reported.

The G.I. never stopped looking for any news of Vinh, whom he only knew as Thuy Lan since she never told him her real name, family background or birthday.

He was able to intensify his search at the start of the 21st century thanks to the growth of the Internet and search engines.

In early June 2019, Reesing and Vinh talked through a mobile chat app for the first time in 50 years through help from Robert, an American-Vietnamese living in Ho Chi Minh City.

Robert had posted old photos of Lan on Facebook asking for locals’ help in searching for the woman and got a match only two days later, Ken told VnExpress.

On Reesing’s request, Robert visited Vinh’s home in Bien Hoa on June 9 to meet her in person and ask some questions to verify that it was he right person.

Vinh, now 67, didn’t get any of her answers correct but recognized Ken the moment she was shown an old photo of him in his Vietnam days.

Ken knew he had found his former lover by the fact that Vinh said she never saw Ken in uniform, which is true because he always changed into civilian clothes on their dates.

“I’m sorry for not keeping my promise,” Ken told Vinh, in Vietnamese, on the first time they talked in 50 years. He had learned the phrase by heart for this special occasion.

The woman was Vinh. Occasionally, she would look up at the flight information display board placed outside the airdrome to check on the status of Reesing’s flight.

An hour had passed since his flight status changed to ‘Arrived’ on the board when one of Vinh’s relatives alerted her. “He’s here”.

The wait was finally over. The grey-haired Ohio man approached his former Vietnamese lover who was visibly overwhelmed with emotions, and they gave one another a tearful embrace. One 50 years too late.

Reesing, now 73, would be a welcome guest at Vinh’s house in Bien Hoa during his two-week stay in Vietnam, they said.

“My family, they are all happy for me because I can find such a special friend at my age,” Vinh told Tuoi Tre (Youth) newspaper.

“If he went through all those troubles to find me, it must mean he really missed me,” she added.

Ken is divorced with no children, while Lan lives with a daughter from a past relationship.

“Meeting my old love after 50 years is really a big surprise and beyond anyone’s imagination,” Vinh said.

Ken said he had intended to visit his old base in Bien Hoa to take some photos during his Vietnam stay, but that didn’t seem so important anymore after meeting Vinh at the airport.

He said he wanted to try riding a motorbike and go to the beach with Vinh. But above all, he wanted the two of them to spend quality time together, even through such simple activities as helping her run a family porridge shop.

The family-run porridge shop in Bien Hoa may expect more diners in the days to come as Reesing and Vinh’s beautiful story has made headlines across the nation.

It stands to show that happy endings do exist, even if they come 50 years late.