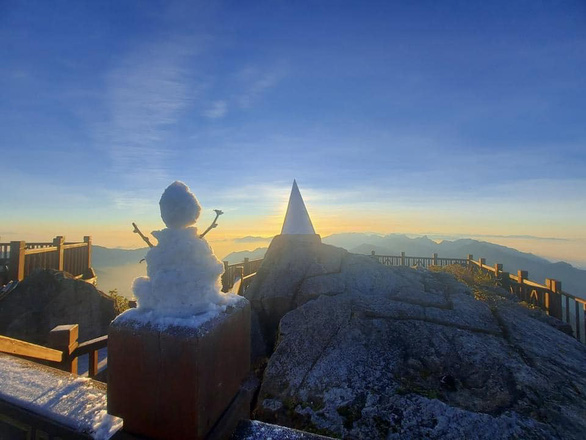 Mount Fansipan, the highest peak of Vietnam, was hoar frost-covered on Sunday evening and early Monday morning, while local temperatures dropped to as low as zero degrees Celsius due to the effect of a southbound cold wave.

Luu Minh Hai, director of Lao Cai Province Hydro-Meteorological Station, told Tuoi Tre (Youth) newspaper on Monday that some areas of the mountain have been coated with a thin blanket of snow in the morning.

A cold spell caused dry weather and high-level radiation in daylight but a huge drop in temperature at night, leading to the formation of the hoar frost, Hai said.

“The cold air is forecast to weaken while temperatures rise within today and no hoar frost would appear the next day,” Hai added.

Visitors, however, have not been allowed to ‘check in’ at the snow scene as the Fansipan cable cars are temporarily suspended over the COVID-19 epidemic.

This is the first snow observed on Mount Fansipan since the start of the cold season this year.

Bordering China to the north, Lao Cai is among the northernmost provinces of Vietnam, with snow occasionally falling in winter.

Northern Vietnam has entered its coldest time of the year when temperatures have dropped to zero degrees Celsius at night and in the morning.

The northern edge of a low-pressure system compounding cold air will bring turbulence of high east winds, triggering heavy rain and thunderstorms along the central coast and in the Central Highlands region, according to the National Center for Hydro-Meteorological Forecasting.

Some central coastal provinces including Quang Nam, Quang Ngai, and Binh Dinh will experience heavy rainfall of 300-350 millimeters while other southern provinces are forecast to see occasional thunderstorms and moderate precipitation of 50-150 millimeters.