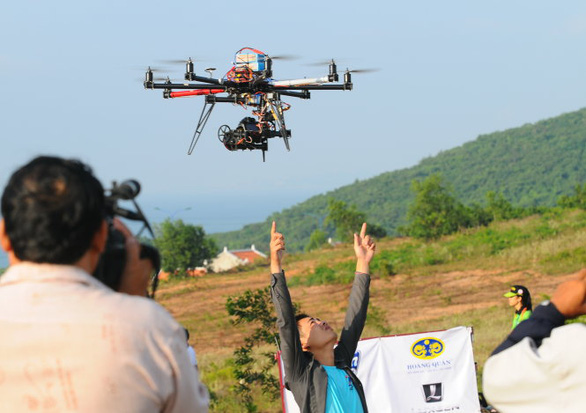 A made-in-China toy drone was found on the apron of an airport in Vietnam on Tuesday, with authorities suspecting that it had flown into the airport before crashing.

The drone was detected at Da Nang International Airport by Ho Quoc Trung, a staff member of the Vietnam Airport Ground Services Company Limited, while he was on duty in the aircraft parking area on Tuesday afternoon, a source told Tuoi Tre (Youth) newspaper.

Trung then handed the drone over to airport authorities who said it might have lost control and landed at the airport.

The UAV, a Y20 Y-series Drone with no camera or memory card, was identified as a toy, airport authorities said.

Based on CCTV footage, Da Nang Aviation Security Center initially determined that the drone crashed at 12:31 pm on Tuesday.

The unauthorized use of drones and superlight aircraft in the airport area is an act that seriously threatens air security and safety, according to the Ministry of Transport.

Some kinds of superlight UAVs with high-tech features can carry, lift, and lower heavy objects and are controlled remotely by radio waves, according to the CAAV.

They can fly at an altitude of 5,000 meters at a maximum speed of 120 kilometers per hour and carry objects weighing up to ten kilograms for a distance of up to seven kilometers for 40 minutes without stopping, CAAV general director Dinh Viet Thang cited the Ministry of Public Security.

Saboteurs can use such facilities to crash into works or aircraft at airports, or carry weapons or explosives for their sabotage schemes, Thang warned.