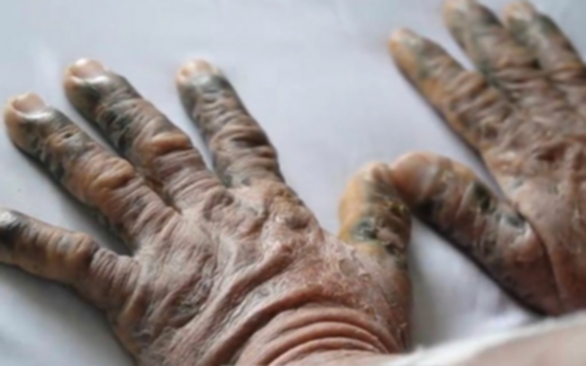 Many people in Vietnam have suffered poisoning from heavy metals after taking herbal drugs of unclear origin, according to doctors.

Doctors of Cho Ray Hospital in Ho Chi Minh City said that they had recently treated many cases of heavy metal poisoning due to the prolonged use of herbal drugs of unknown origin.

Many of these patients bought herbal drugs, some at a market, for use after being told by others that they were good for health or could cure joint pains or even prevent stroke, and other ailments.

Considering the medical histories of the poisoned patients, doctors discovered that they were once healthy, but they began to develop abnormal symptoms and their health gradually worsened after taking unknown herbal drugs.

The patients were hospitalized with symptoms of gastrointestinal toxicity, acute renal failure and others, and they later received treatment that might help remove toxic substances from their body.

In patients who have taken toxic herbal drugs for a long time, therapies to remove the harmful substances might no longer be effective and doctors will only be able to treat the symptoms, Dr. Quang warned.

At Cho Ray, one of the most serious poisoning cases was a 27-year-old patient N.T.H., hailing from Dak Lak Province in the Central Highlands.

H. had been receiving treatment for ankylosing spondylitis at the hospital since 2019 but she later turned to herbal drugs to treat her condition for four months on the advice of a neighbor, Dr. Doan Uyen Vy said.

Consequently, she suffered from prolonged diarrhea, edema, and exhaustion.

When H. returned to Cho Ray, doctors found her suffering from a very severe intestinal ulcer and heavy metal poisoning due to her taking the drugs.

Her condition was so serious that she had to receive albumin and protein infusion every day for two years, at a total cost of hundreds of millions of dong (VND100 million = US$4,360), Dr. Vy said.

Herbal medicines without a clear origin can be mixed with a lot of harmful substances, and they can be detrimental especially when taken for a long time, Dr. Quang warned.

Many patients with joint disease said that they felt comfortable when they took herbal drugs, but did not know that they contained corticosteroids, which are not good for them on long-term use, the doctor said.

Such drugs may also mix heavy metals such as lead, copper, zinc and arsenic, among others, which will affect various organs including heart, kidneys, and eyes upon consumption.

Metal poisoning cases require long and expensive treatment, doctors warned, adding that if the poison stays in an organ for a long time, it can cause complications in that organ.

There has been evidence from the world’s medical literature that some herbal medicines contain heavy metals and cause serious diseases if used for long, said Dr. Vy.

When people take these medicines, heavy metals will accumulate gradually in their body over time and can cause moderate toxicity that will later turn into sub-acute and then acute poisoning, leading to rapid death.

Doctors advised that patients with chronic diseases should not take any herbal drugs without professional consulting, as they can contain hazardous substances, but should visit doctors for examination and take prescribed medications.

Before taking any medicine for a long time to treat a disease, people should consult their doctors for instructions on how to use the drug safely and effectively, avoiding risks of drug poisoning, doctors recommended.