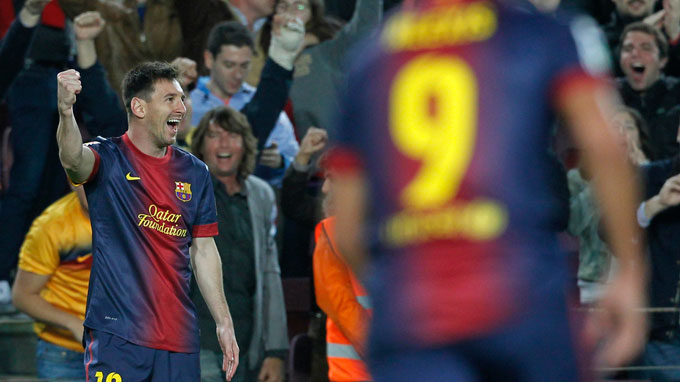 Lionel Messi came off the bench to move Barcelona within two points of clinching the La Liga title with a 4-2 win over Real Betis at Camp Nou on Sunday.

Dorlan Pabon and Ruben Perez had twice given the visitors the lead in the first-half either side of Alexis Sanchez's equaliser.

However, after David Villa had once again levelled the scores, it was unsurprisingly left to Messi to decide matters as within three minutes of coming on he fired in a wonderful free-kick and then was on hand to tap home at the end of a flowing move involving Sanchez and Andres Iniesta.

"The important thing is to go out as league champions," Sanchez told Canal Plus afterwards.

"We have to go game by game, fighting for the victories, but the fundamental things is to win the league whenever it may be.

"When Messi comes on he offers a lot to the team. It motivates us to play together and it is obvious that he is an important player, but (whether he starts or not) are decisions that I don't know."

However, following the Bayern defeat, Barca again started in the worst possible fashion as a goal kick from Jose Manuel Pinto was headed back towards the Barca goal by Jorge Molina and avoided everyone on its way through to Pabon who finished confidently into Pinto's right-hand corner.

The lead only lasted six minutes as Iniesta turned wonderfully on the left and delivered a tantalising ball into the middle which Sanchez bulleted home with his head to register his sixth league goal of the season.

Villa then passed up two incredible chances to give Barca the lead as he inexplicably blazed over from six yards after being teed up perfectly by Iniesta and Xavi before placing his side-footed effort too close to Adrian after Cristian Tello had cut the ball back from the byline.

Tello was then desperately unlucky as he cut in from the left and rocketed a shot that came off the underside off the bar that didn't quite fully cross the line on its way back out.

However, Betis were back in front two minutes before half-time as Perez found the top corner with a glorious strike from fully 30 yards.

The game was turned on its head again within 15 minutes of the restart though as Villa finally got his name on the scoresheet as he took advantage of incredibly slack Betis defending to head home Dani Alves' cross before being replaced by Messi.

And it took the World Player of the Year just three minutes to make his mark on the game with a sumptuous free-kick that curled into Adrian's top left-hand corner.

That goal ensured Messi continued his streak of scoring in 21 consecutive league games and he so nearly repeated the trick with another free-kick that struck the bar nine minutes later.

But the Argentine soon did have his second of the evening thanks an outrageously good Barca move as an Iniesta backheel released Sanchez and he laid the ball back across goal for Messi to roll into an empty net.

Elsewhere, Real Zaragoza moved out of the relegation zone with just their second win of 2013 as two goals from Antonio Apono and another from Rodri handed them a comfortable 3-0 victory over Rayo Vallecano.

Mallorca are now four points from safety with just four games remaining though as they could only managed a 1-1 draw at home to Levante.

In the day's other match between two sides with outside hopes of European football next season, a first-half blitz from Sevilla saw them beat Espanyol 3-0.