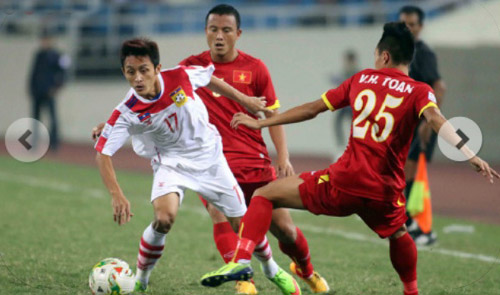 Vietnam are set to advance to the semifinals of the 2014 Southeast Asian Football Championship, or AFF Suzuki Cup, following their 3-0 win over Laos in their second group stage game in Hanoi on Tuesday.

The Vietnamese hosts have earned four points so far as they drew 2-2 with Indonesia in the opener of Group A on Saturday.

The Philippines have booked a place in the semifinals after they crushed ten-man Indonesia 4-0 in the other match of the group today. The Filipinos cruised to a 4-1 victory over Laos last weekend.

All Vietnam need is one point in their final group stage game against the Philippines on Friday, as they now rank second in the group, followed by Indonesia with only one point and Laos with zero point.

Toshiya Miura, the Japanese coach of Vietnam, made many changes to his starting XI from last Saturday’s game against Indonesia, with Cong Vinh, Tan Tai, Anh Duc, Van Bien, and Huy Toan brought in right from the beginning.

Vietnamese midfielder Minh Tuan opened the scoring in the 28th minute in the encounter at My Dinh Stadium with the Laotians.

Midfielder Tan Tai controlled the ball in the middle of the field and slotted a pass to the right side to Tuan, who sprinted faster than a Laotian defender before shooting to score.

During the remaining time of the first half, the Laotian players were pushed back to their home field to defend against many all-out attacks by the hosts.

In the 56th minute, Vietnam were awarded a free kick near the right corner post and Tan Tai shot up to Minh Tuan, who sped up and blasted another shot but the ball hit the right goal post.

In the following minutes, Thanh Luong and Cong Vinh had several clear chances but they either shot the ball wide or failed to defeat the Lao goalkeeper.

In the 85th minute, Cong Vinh lifted the score to 2-0. A Vietnamese midfielder blasted a straight shot but the Laotian keeper successfully saved it. The ball bounced back to Vinh, who cushioned home from a distance of five meters.

Vietnam and Singapore are hosting the 2014 AFF Suzuki Cup from November 22 to December 20.

Thailand now top the group with three points after defeating the Singaporean hosts 2-1 on Sunday, while ten-man Malaysia held Myanmar to a 0-0 draw earlier the same day.