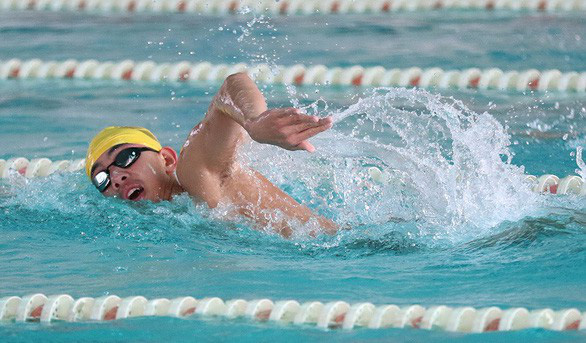 Vietnam’s young swimmer Nguyen Huy Hoang has won a ticket to Tokyo 2020 as he hit the Olympic standard while competing at a world swimming championship on Tuesday.

The 19-year-old swimmer touched the wall in 7:52.74 in the men’s 800m freestyle event at the FINA World Championship in South Korea.

While the performance was not enough for him to advance to the final of that event, it beat the Olympic Standard A of 7:54.31.

This means Hoang will compete in Tokyo next summer, according to Nguyen Trong Ho, an official from the General Department of Sports and Physical Training.

At the FINA World Championship, which is being held in South Korea’s Gwangju City from July 12 to 28, Hoang will attend another event, the men’s 1,500m freestyle, on July 27.

Hoang topped the men’s 800m freestyle of the 2018 Summer Youth Olympics organized in Argentina. At the 2018 Asian Games in Indonesia, Hoang won a silver and bronze medal when he was only 18.

The young talent is the first athlete of his country to win a place at Tokyo 2020 as other Vietnamese hopefuls are still in the running for a ticket to Japan.

Among them is top female swimmer Nguyen Thi Anh Vien, who is also competing at the FINA World Championship.

Vien finished the women’s 400m freestyle event in 4:13.35, which only surpassed the Olympic Standard B.

Athletes who hit the Standard B mark will not get a place in the Olympics in their sport if there are enough athletes meeting the Standard A in that sport.

This means Vien has to try to reach the higher standard during her time in Gwangju. The 23-year-old Vietnamese will have the chance to do so as she competes in the women’s 400m individual medley event on July 28.

The 2020 Tokyo Olympics are scheduled to take place in the Japanese capital city from July 24 to August 9 next year, with 339 events in 33 sports.