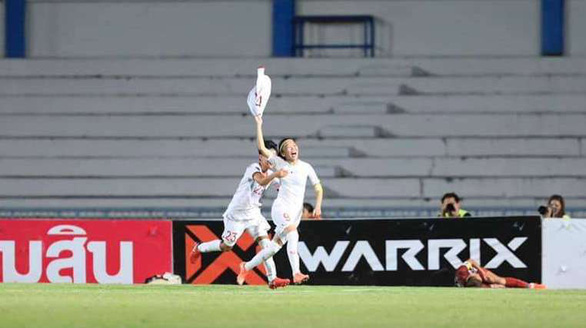 A brave 10-woman Vietnamese side beat hosts Thailand on Tuesday in the final of the 2019 AFF Women's Championship in Chonburi to clinch the third title in their history.

Vietnam played with 10 women in most of the extra time at IPE Chonburi Stadium 1 but their bravery and perseverance helped them stand firm against the Thais who had won four trophies before.

The Vietnamese women approached the final showdown with dynamism against the reigning champions but it was Thailand who created the first chance.

Siliwan curled the ball narrowly wide from a free-kick 25 minutes into the game.

The Vietnamese answered in the 38th minute after Hai Yen took advantage of the Thais’ mistake in defense to dash down the left flank, but her shot was off the target.

After a goalless first half, the hosts dominated the second, forcing the visitors to play defensively most of the time.

But neither of the sides scored in regulation time.

A cross from the right found Nhu and the skipper defeated goalie Yada with a sensitive finish.

Nhu took off her shirt to celebrate the goal and was shown a second yellow card.

With 10 women, Vietnam staged a brave defensive performance in the remaining time.

The Vietnamese defenders neutralized many attacks by the hosts and secured their narrow victory.

This is the third time Vietnam have won the championship, with the other two being in 2006 and 2012.

The Vietnamese women reached the final by defeating the Philippines 2-1 in their semifinal encounter. They had advanced to the knockout stage as the winners of Group B, including rivals Myanmar, Indonesia and Cambodia.

Thailand, Malaysia, the Philippines, Singapore and Timor-Leste were placed in Group A.

The 2019 AFF Women's Championship is the 10th edition of the international women's football tournament organized by the ASEAN Football Federation (AFF), having taken place in Chonburi from August 15 to 27, with the Thais being the defending champions.