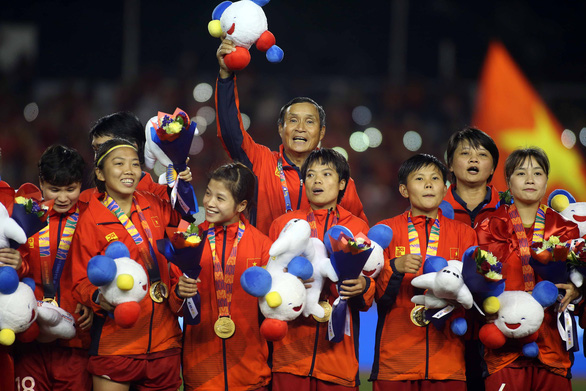 Vietnam’s national women’s football team have ended 2019 in the 32nd place in the world as they climbed two notches in the latest FIFA Women's World Ranking, after winning their sixth gold medal in Southeast Asian Games 2019 women’s football in the Philippines last week.

FIFA revealed its final women’s world ranking of 2019 on Friday, considering a number of international and regional tournaments at which the Vietnamese women had delivered their good performances.

The Golden Girls defeated Thailand 1-0 to defend their gold medal in women’s football at Rizal Memorial Stadium in Manila, the Philippines, on December 8.

In the 2019 ASEAN Football Federation (AFF) Women's Championship in August, the team clinched their third AFF title after beating hosts Thailand 1-0 in the finale.

In April this year, they also qualified for the final round of the FIFA Olympic Qualifying 2020 after thrashing Jordan 2-0 at Transportation Institute Stadium in Tashkent, the capital of Uzbekistan.

The streak of achievements in 2019 saw Vietnam’s national women’s football team promoted from the 34th position in the FIFA Women's World Ranking announced in September to the 32nd place in the new ranking.

However, this is not Vietnam’s highest position in the FIFA Women's World Ranking as the country once ranked 28th in the world in June 2013.

Meanwhile, Thailand's national women’s football team, who appear to be Vietnam’s archrivals, improved one place to the 38th in the world and stayed seventh in the continent.

In the newly-released ranking, the U.S. women’s national team continue to be the No. 1 side in the world, ahead of second-placed Germany and the Netherlands at third.