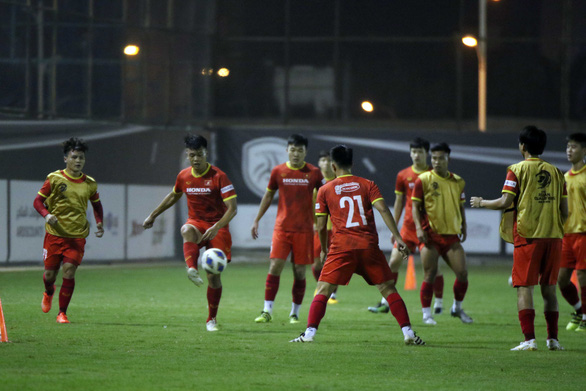 Soon after arrival in Saudi Arabia, the Vietnamese national football team have begun practicing, even in the scorching weather, in preparation for their match against the hosts in the final round of the 2022 World Cup Qualifiers.

The first training session of the team, led by chief coach Park Hang Seo, took place at 8:00 pm on Saturday in the host country, the Vietnam Football Federation (VFF) said.

Park asked his players to train at such time since he wanted them to get used to the time zone difference as well as the sizzling weather with high humidity in Saudi Arabia.

The Golden Stars were training in 43 degrees Celsius amid the dry desert wind.

The team’s doctors have taken remedies to protect the players’ health, while the coaching staff have drawn up a plan of activities in adaptation to the new time zone to help the players quickly get used to the new conditions in Saudi Arabia.

The first training session took place for over an hour, during which the players practiced under the direction of Park after doing a warm-up mainly by running around the field.

Japanese club Cerezo Osaka’s goalkeeper Dang Van Lam, who has not been able to join the national team since 2019 due to the COVID-19 pandemic, has been back to the training pitch.

After finishing its impressive journey in Group G in the second qualifying round of the 2022 FIFA World Cup, Vietnam progressed to the final round of qualifiers as one of the five best group-stage runners-up.

Vietnam are pooled in Group B alongside Japan, Australia, Saudi Arabia, China, and Oman in the final qualification.

The match between Vietnam and hosts Saudi Arabia will take place at 1:00 am on September 3 (Vietnam time).

The two teams faced twice in the 2002 FIFA World Cup qualifying round and the Southeast Asian squad failed both times.