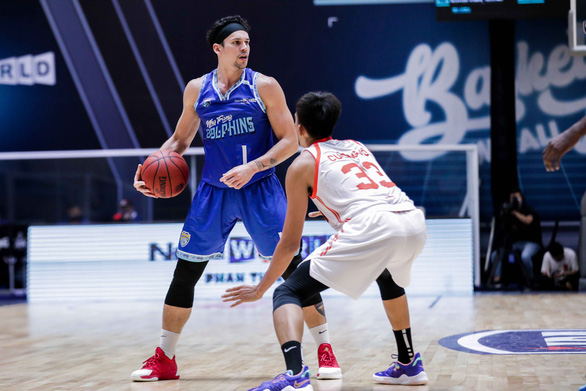 Kevin Dasom, a Thai player who has played for several teams at the VBA Premier Bubble Games - Brought to you by NovaWorld Phan Thiet this season, has captivated fans with his radiant beauty no matter what squad he is playing for.

In just over a month of the 2021 VBA Premier Bubble Games experimental series, Dasom has attracted great attention as he has put on many different jerseys.

Dasom was recruited by Saigon Heat following a last-minute deal, before moving to Nha Trang Dolphins as a band-aid solution to the absence of Devin Harris, who had suffered injuries.

The Thai player has thus had a collection of red, yellow, and blue jerseys.

As a part of the Dolphins, Dasom took just a short time to fit into the team.

In Game 25 against Danang Dragons, this handsome defender scored 18 points and nine rebounds.

Dasom’s successful shot at the beginning of the fourth period pressured Danang Dragons’ coach Phan Thanh Canh into sending his main shooters back on to the court to retain a victory.

After participating in the series of experimental games at the 2021 VBA, Dasom returned to Thailand to continue pursuing his professional basketball career there and is currently in excellent form.

In the recent game for BR Chaophraya Thunders, he scored 47 points, 12 assists, and 11 steals.

Nha Trang Dolphins took on Danang Dragons in Game 25 of the VBA Premier Bubble Games - Brought to you by Novaworld Phan Thiet.

In front of a defense with little experience, the Dragons were able to dominate the game shortly after the start and took the lead in three out of four periods of the game.

At the end of the third period, the gap was safe enough for the Da Nang team to send many players in their second formation to the court as a test, but that was the opportunity for the Nha Trang side to fight back.

As the difference was narrowed so quickly, coach Canh brought the main team back, just in time to seal an 89-81 victory.

As usual, captain Akeem Scott was named MVP of the game with 35 points, ten rebounds, and nine assists.