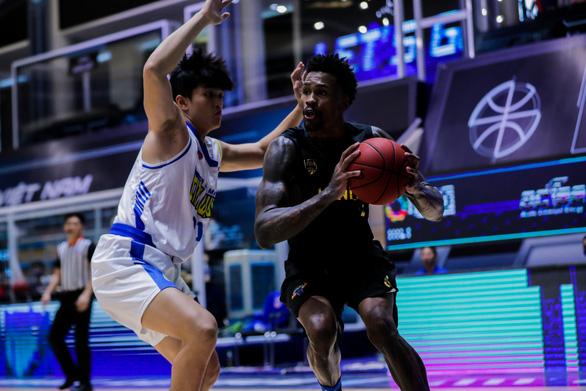 Bui Anh Khoa has not spent too much time on the court this season, but the rookie made a strong showing in Game 37 when he shut down 2.06-meter-tall veteran Mike Bell of Hanoi Buffaloes.

Though he has played in several amateur basketball tournaments, the VBA Premier Bubble Games - Brought to you by NovaWorld Phan Thiet has been his professional debut.

Though Khoa was originally told to play defense, he had no issue moving the ball down the court and scoring against Mike Bell, who is not only 20 centimeters taller than him, but also far more experienced.

Khoa’s surprising play was just the morale Ho Chi Minh City needed in order to protect their narrow lead against the Buffaloes.

Passion for the sport

Before Khoa, London seemed to be Bell’s biggest rival on the court.

The 25-year-old foreign player of Ho Chi Minh City Wings chalked up 31 points and 14 rebounds, helping the Wings defeat the Buffaloes in their previous second encounter.

Basketball experts commented that, while Bell was the 2018 and 2019 VBA Best Defensive Player, young players in the league are gradually making a name for themselves.

Ho Chi Minh City Wings pulled off a 76-72 victory against Hanoi Buffaloes in Game 37 of the VBA Premier Bubble Games - Brought to you by NovaWorld Phan Thiet, thanks to cohesive play between the team’s foreign and homegrown players.

With 23 points and 23 rebounds, Makinde London earned the Most Valuable Player (MVP) award.