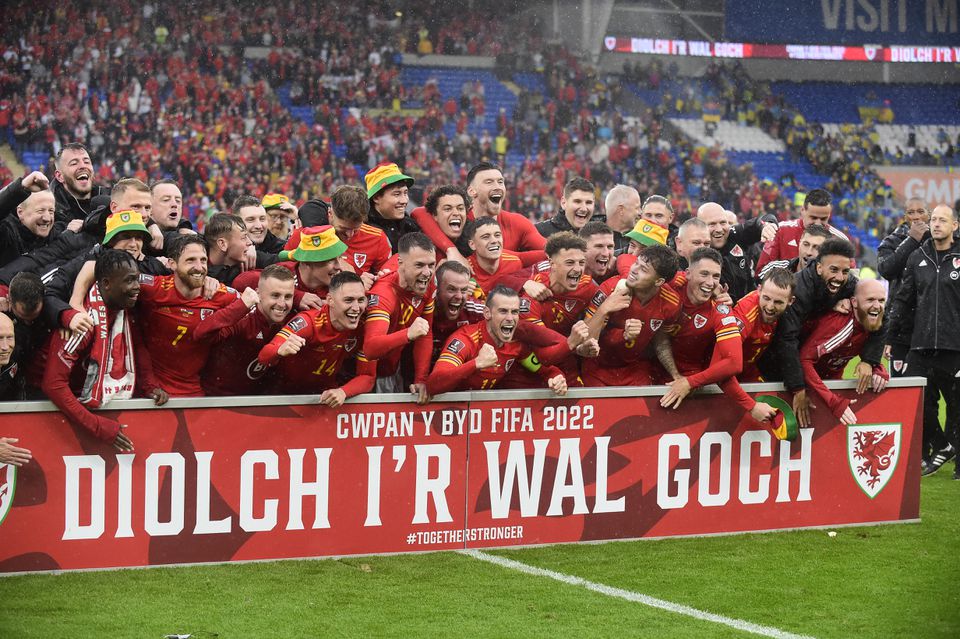 CARDIFF, Wales -- Wales ended their 64-year wait for a place in the World Cup finals as they beat Ukraine 1-0 on Sunday to end the war-torn nation's hopes of reaching Qatar.

An own goal from Ukraine winger Andriy Yarmolenko, who headed a Gareth Bale free-kick into his own net, decided the contest.

It was a cruel way for Ukraine's qualification effort to end with Oleksandr Petrakov's side, who beat Scotland in the playoff semi-final, again showing a level of football which would have certainly merited a place in November's 32-team tournament.

With half the team not having played competitive club football since the Russian attack in February and with their nation's tragedy never far from their minds, Ukraine deserve huge credit for coming so close to making the finals for the second time in their country's history as an independent nation.

"We did everything we could. I want to say sorry that we didn’t score but this is sport," said Petrakov.

"I do not have any criticism of any player in the team."

There were emotional scenes at the end of the game as Ukraine's disappointed players showed their appreciation to their more than 2,000 supporters at the Cardiff City Stadium.

They were then joined by the Wales players who before undertaking their own lap of honour also saluted the Ukrainian fans.

The home crowd created a rousing atmosphere before the match with an outstanding rendition of their national anthem but despite the loud and passionate atmosphere, Ukraine were on top from the outset.

Wales keeper Wayne Hennessey was busy in the opening half making three vital saves to keep the score level.

Oleksandr Zinchenko had the ball in the net, from a quickly taken free-kick but Spanish referee Antonio Mateu Lahoz had not blown his whistle and the effort was ruled out.

Hennessey did well to deny Roman Yaremchuk after he found himself clear on goal and then the Wales keeper was alert to get down to a dangerous Zinchenko drive and then to smother the ball at the feet of Viktor Tsygankov.

It was against the run of play then when Wales grabbed the lead in the 34th minute, Bale fired a low free-kick from 25 metres out and Yarmolenko's stooping, attempted header clear, flew into the net past the helpless Georgiy Bushchan.

Aaron Ramsey missed a great chance to double Wales' lead after the break, side-footing wide from a great position and then Neco Williams drilled a well-struck shot against the post.

But Wales, who last appeared in the World Cup finals in 1958, had Hennessey to thank again as he pulled off a fine one-handed save from substitute Artem Dovbyk's powerful header, six minutes from the end.

The crowd rightly sang Hennessey's name in the final minutes, the first of many songs that are sure to be sung long into the Welsh night.

"It's the greatest result in the history of Welsh football. We're all ecstatic," said Wales captain Bale.

"It's what dreams are made of and what we've been working for since we started. It's for all of our amazing fans – I can't describe the feeling."