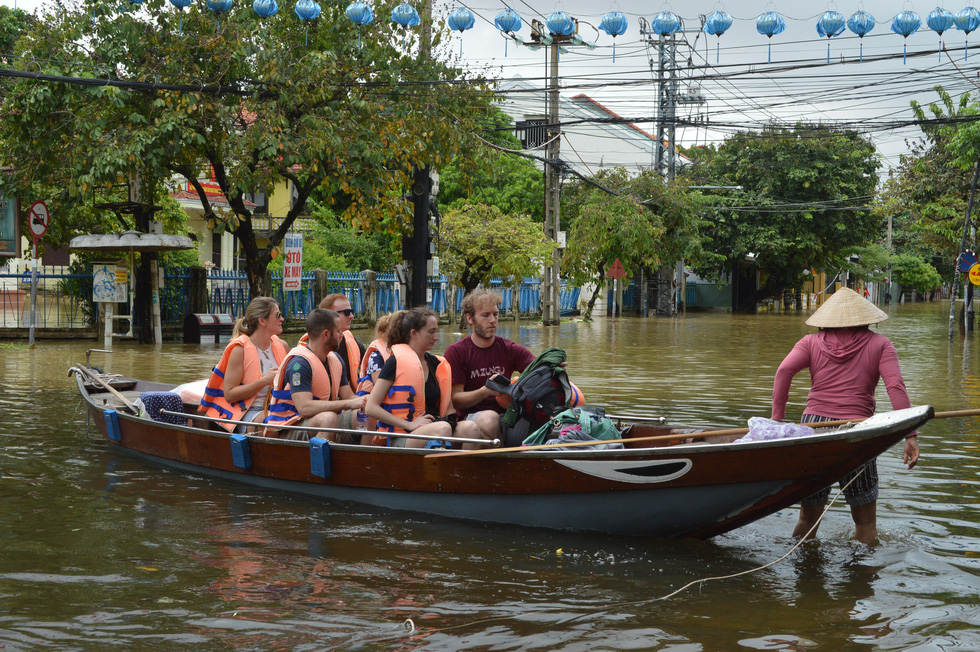 A new type of tour, which offers tourists boat trips along flooded streets in Hoi An Ancient Town in central Quang Nam Province, has attracted many Vietnamese and foreign visitors over the past days.

Suffering torrential rains and water discharges from upstream hydropower reservoirs, many streets in downtown Hoi An City have been severely submerged.

With all of the flooding, boats have become the local people’s main means of transport around the city.

Almost every household in Hoi An’s low-lying areas, such as Cam Kim and An Hoi, has a boat stored on the roof of their houses to commute in flood seasons.

The boat tour service began after several tourists, particularly foreign visitors, had offered to pay money for a ride around the city’s ancient town on boats.

“I charge each passenger VND100,000 [US$4.31], and only accept a maximum of seven passengers on each trip with them having to wear life jackets to ensure safety,” said Nguyen Thi Huong, a boatwoman providing a boat tour.

Huong will carry tourists to destinations at their requests, as long as those destinations are not far away from the ancient town and are safe.

“The visitors were all excited to see the ancient town and take pictures of Hoi An while sitting on the boat,” Huong said.

Foreign tourists were not the only ones attracted to the new tours; domestic visitors from neighboring localities in Quang Nam and the central city of Da Nang also came to try the service.

“[After] reading online news [about the service], we traveled on motorbikes from Da Nang to hire a boat to take photos,” said a young Vietnamese visitor.

Below are photos capturing people touring Hoi An on boats.