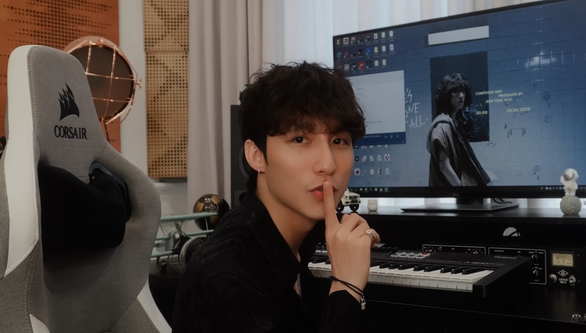 M-TP Entertainment, owned by Vietnamese star singer Son Tung M-TP, was fined VND70 million (US$3,049) on Thursday following the release of his music video for 'There's no one at all' on YouTube on April 28, which authorities deemed as 'negatively affecting community health and mentality.'

The inspectors from the Ministry of Culture, Sports, and Tourism held a working session with Son Tung M-TP in Hanoi on Thursday to discuss the violation.

The singer released the music video for his song ‘There’s no one at all’ on the night of April 28.

In the clip, the singer plays a vagabond who attacks people and causes trouble in order to assert his existence in a world he despises.

The last scene of the video features the character jumping off a building.

The video was taken down in Vietnam on April 29.

Upon the video’s release, many viewers took to the comment’s section to share their opinions that the music video had a dark tone and spread a negative message about life, particularly given its 'violent' and negative imagery in the context of a spate of recent suicides committed by young students across the country.

The Ministry of Culture, Sports, and Tourism summoned Son Tung M-TP for a working session, but he did not show up and instead sent an authorized agent.

Following the working session, the Ministry of Culture, Sports, and Tourism levied M-TP Entertainment, a company owned by the singer, with a VND70 million fine pursuant to Section 3 of Article 13 of Decree No. 38 on the sanctioning of administrative violations in the field of culture and advertising.

This law imposes a fine of VND30-40 million, but the penalty can be doubled if applied to a collective, in this case, Son Tung M-TP’s company.

According to the Department of Performing Arts, Son Tung M-TP's music video adversely influenced young people, particularly with the suicide scene at the end of the video.

The department also noted that Son Tung M-TP’s large following of young people made the video even more dangerous.

The content of the music video violates Section 4, Article 3 of Decree No. 144 on performing arts activities, the department continued.

This section prohibits any content that goes against Vietnam’s customs and traditions, or has damaging impacts on the health and psychosocial well-being of the community.

Therefore, the Department of Performing Arts proposed that the Authority of Broadcasting and Electronic Information take measures to prevent the music video from being shared on the internet.

Luu Dinh Phuc, head of the Authority of Broadcasting and Electronic Information under the Ministry of Information and Communications, confirmed on April 29 that the agency had sent a request to Google to block the music video.

Later the same day, Son Tung M-TP apologized to the public for his product's negative message about life.

Tung also explained the message he wanted to convey through the music video.

"The purpose of producing this video is to convey a message: let's understand the feelings of lonely people, and the importance of loving, protecting, and opening our hearts before it is too late," Tung expounded.

"Furthermore, I want to express my compassion for those who are depressed.

"I hope they know that they are not alone and that there are many others just like them."

Prior to the release of the music video, Son Tung M-TP stated that the video was a new chapter in his life and career. He merely wished to demonstrate his undying love for music.

When governmental agencies responded swiftly to the music video, the majority of netizens seemed to agree with the decision.

However, some argue that rather than utilizing governmental power to penalize artists, the public should be allowed to use the report function to push web platforms to remove Son Tung M-TP's music video.