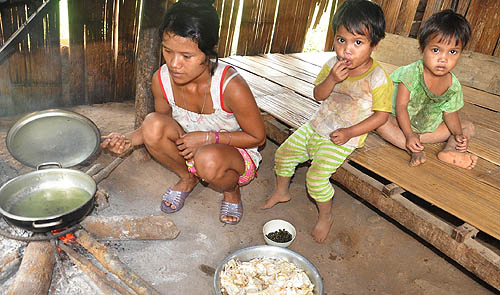 Effectiveness of poverty allowance a concern

The Vietnamese government is mulling a US$75-100 million loan from the World Bank to help people in the three or four poorest provinces in the nation to escape from poverty.

However, the effectiveness of the project is a concern, as the proposed amount is only enough to grant each poor family a subsidy of VND200,000 ($10) a month, while the salary of an unskilled worker is at least five times higher than that.

On May 28, Deputy Prime Minister Nguyen Thien Nhan chaired a meeting in Hanoi with the Ministry of Labor, Invalids and Social Affairs about the project called “Strengthening Aid System in Society” (SASS), to be sponsored by the World Bank and most likely carried out from the middle of next year. Not only will it target efficient poverty alleviation, it is also aimed at building social protection data, organizing information systems, and modernizing management.

How much is enough?

The project includes three parts. The biggest of which is worth $55 million, which will be used to provide each needy family in the provinces of Ha Giang, Quang Nam and Lam Dong with VND200,000 per month for three years, from 2014 to 2016.

But Deputy Minister of Education and Training Bui Van Ga has suggested including Tra Vinh Province because many children there don’t attend school. The province’s school attendance rate is half the national average.

If Tra Vinh is added, the total budget will rise to $100 million, and the period will be shortened to just two years.

Regarding this issue, a delegate from the Ethnic Committee said, “Each person in Tra Vinh can earn VND100,000 a day. If they don’t have regular work, they can also earn VND1-1.5 million a month – five to eight times higher than the subsidy.

At the meeting many people suggested that instead of cash, people should help the needy gain knowledge, which will help them escape poverty and guarantee their long-term livelihood.

“Is sponsored money being used to support their children or to buy wine?”, one of the representatives worried. To ensure that they spend the money correctly is a challenging problem. In addition, providing money to only three or four provinces over only two to three years will confuse other poor people who are not helped.

Moreover, the budget will be a serious problem, as for only two years the project costs up to $100 million. How much would it cost to be carried out across the whole country with 64 provinces and cities?

Many issues should be carefully considered before implementing the program.

At the meeting, Deputy Prime Minister Nguyen Thien Nhan noted that another solution would be to help the poor from the state budget instead of ODA loans.

As approved, the SASS project will replace two separate government programs which are supporting school fees and supporting electrical costs, and will be applied to a number of selected areas before being expanded to the rest of the country.

The funds will be applied to poor families that have children still studying at school. Every family will receive VND200,000 per month if they ensure certain terms. For example, their children must go to school regularly and achieve good results, and pregnant women and children must be guaranteed basic health care.

“It is provisory aid. Cash will be sent if they meet all the requirements”, a delegate of the World Bank said.

In case people are receiving more than VND200,000 per month from the older projects, they will receive the same amount from this new one.

If more than 60 percent of families in one area live under the poverty line, the project will sponsor all of the families that have children attending school. When families successfully escape from poverty during the program, they will continue to receive aid for two more years.